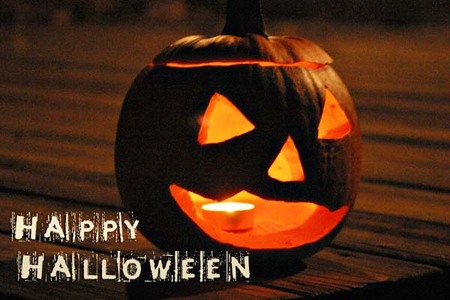 So here it is Halloween night!  My favorite time of the year. Ironically for somebody as hardcore as I am about Halloween, I could really care less about trick or treating. I have no interest in handing out candy at the door. Good thing my sweetie Dave takes care of it! I wouldn't mind actually GOING trick or treating but as I have no child to borrow that won't be happening. What time does Most Haunted Live start from London? I watched Night 1 and Night 2 but missed last night.

Wow does it get dark early. Here it is 5:02 and it's virtually pitch black.  Yesterday we went to a fun Halloween/Oktoberfest party at Peter and Michelle's and I carved a pumpkin and drank Jinx beer and ate the most wonderful German potato salad and pumpkin penne pasta salad. I NEED those recipes!

Incidentally, this gets my vote as the best Halloween game on the web!!!  You can build your own skeleton and enjoy the creepy sounds as you play! TOTALLY cool.

a collage by moi, photos taken this afternoon. Such gorgeous weather! 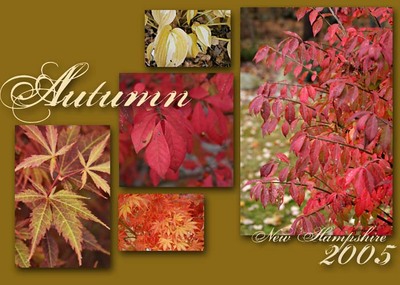 A good time was had by all.

Today I hosted the monthly crop at my house and we had such a great time! For lunch we had loaded 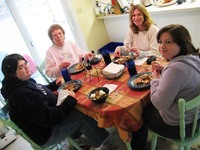 queso nachos with a make your own fixin's bar..... YUM. I look forward to these crops every month because it gives us all a chance to get caught up with each other (those of us that don't work at Oxford anymore), teach each other any new techniques we may have learned, show off new products, browse magazines and catalogs and otherwise get some scrapping done if we're lucky!

These are the things I've really been enjoying lately:

Who is this glamorous woman? 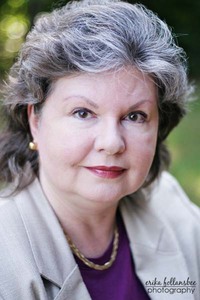 Why, it's my own mother!  She's a Realtor© with Carolinas Prudential, and she wanted me to take some portraits of her to maybe use in some of her business newsletters and stuff. I guess she didn't like the professional one that's on all her business cards and in the realtor books. I don't know if this would pass as a professional-real-estate-agent headshot, but I think she looks awesome here!  Definitely more natural.

Do you guys know anything about moose hunting? Well I never did either until recently. Obviously living in New Hampshire puts me right in the middle of the action. I have yet to SEE a moose in the 4 years I have lived here, but I know they're around because other people see them all the time. We're neck deep in wild turkeys but I have not yet seen a moose. But I digress...... Anyway, because of all the hunters that park outside my house and go tromping through the woods every fall, I like to know what they're up to. So I subscribe to the NH Fish & Game email news. This keeps me abreast of which animals are in season, and what weapons are allowed on what dates, etc.

So anyway, the 2005 moose hunt here just ended this past Sunday. I guess this is a really big deal to hunters. They do a lottery every year and winners are selected through a computer-generated random number draw for the limited number of permits awarded every year. According to my newsletter, over 15,800 applications were recieved in the spring, and they award something like 500 permits, depending on the size of the herd that year. That's why they call it a lottery, because your chances are kind of slim. New Hampshire's moose hunt is nine days, starting the third Saturday in October. It's a really really bad time to be a moose. Just to give you an idea, this year's hunt took 398 moose statewide. (out of a population of an estimated 6500)

I'm glad I don't know anybody personally who hunts. I couldn't stomach it. I understand that hunting is an important wildlife management tool to prevent overpopulation and to keep the herd healthy, but moose are so majestic. Who could hurt one? And I also understand the food aspect... I know wild game meat is very healthy and most hunters make efficient use of the meat and parts. And I also know hunting deer, for example, for the meat is much more humane than the slaughterhouses where the McDonald's hamburgers come from.  I'm just a softie. Deer are so pretty. Life is cruel. Makes me want to be a vegetarian.

All right for a Wednesday. 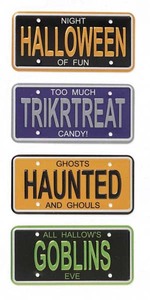 Today I'm boring. Uneventful day at work (not a bad thing), and then came home and Dave and I ran some errands.  To the post office to mail off a layout to Paperkuts, woohoo! Just one. Then to check out what's new at B&E Scrapbooking because you know, it's right THERE next to the post office. :) I got these cute little Karen Foster Halloween license plates. Aren't they darling? This picture doesn't do them justice because they're SHINY and so vibrant. I had never seen them before. The owner is so cute, she recognized me and even remembered the things I asked about last time I was there. Then on to the grocery store where I tried to get some low-sodium things to eat. I try, anyway. My BP is just terrible the past few days. I realize I need to eat better, and exercise. 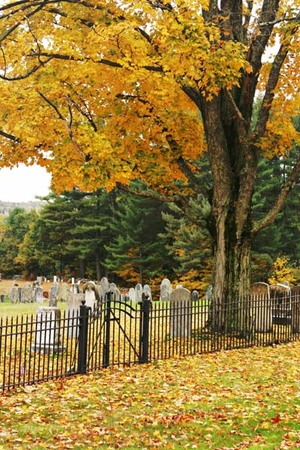 ....specifically, Monday. I took this photo on Monday because I heard the Nor'easter was coming on Tuesday. I'm glad I did!  Not so many leaves left anymore.  I love this old cemetary, it just oozes New England charm. 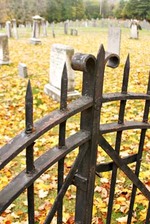 In the olden days a tavern or inn could claim its fame by saying "George Washington slept here." I guess in the modern era, to say "Elvis ate here" carries a similar significance. My mom showed us this place in Stoney Creek, NC, near where my parents live. I never knew it was there. So yes, here it is. Brightwood Inn. Looks like it hasn't changed much, either. (we didn't go in, this was just a drive-by)

A long paneled barroom is on the left; two dining rooms with tables and booths are on the right. In one of those booths, Elvis ate a hamburger with tomato and lettuce and downed a pint of milk while a woman companion sipped a Miller High Life. Presley wasn't famous then. It wasn't until later that the woman, who lived in Burlington, called the inn to say the king of rock 'n' roll had dined at the Brightwood.

I should tell you that the little sign to the left of the door says "Knock on door if locked. ID Self. NO TANK TOPS." 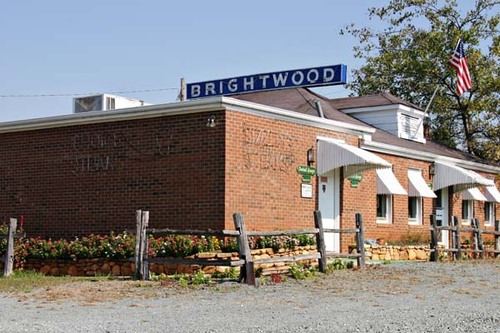 Now I'm back and I need a vacation from my vacation. It was a busy few days! I got to see all my old girlfriends at Kelly's wedding in Chapel Hill and we all had a blast. The wedding was beautiful, and it was just a great day to be with old friends and good times at the ol' UNC.

Here's me and my girls: Sara, Emily, Kelly, me, and Jenny 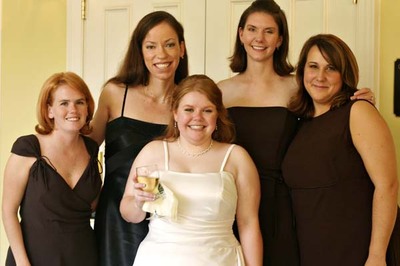 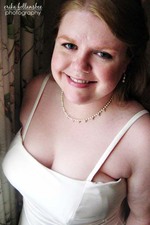 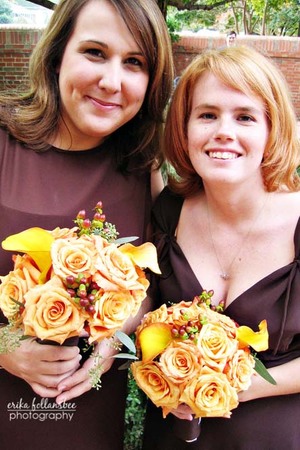 Also I have a new post on my Cravings blog....

I can't even TELL you how glad I am to have the rest of this week off. It's been an incredibly long time since I had any consecutive days off work. <here's where I start whining> I had one day in August, one day in June, and the last time I had more than one at a time was in May.  I NEEDED A BREAK.  So, I am off to the Tarheel State to visit my family and attend Kelly's wedding. Busy busy busy!!  I will be SO happy to see my folks and enjoy some warm weather which I already miss.

Here's a 2-year anniversary self portrait we took today: