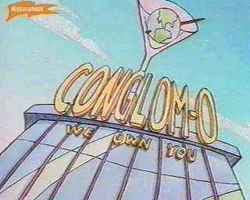 Just one more little nugget about Con-Glom-O and I will drop the subject for a while. :) Bear with me. The Winter Weather Policy does not only apply for wintry weather, but pretty much any Act of God that might befall the roads.

Back in May of this past year, maybe those of you in different parts of the country might not remember this, but up here in New Hampshire we had what they are calling the Hundred Year Flood. Whole towns were under water, including the one where I live and the neighboring one where Con-Glom-O is located. Bridges were washed out, roads were closed and the whole town was Closed for All Traffic. Many many people lost their entire houses. This is easy enough to understand, yes?

And yet come Monday May 15, we eagerly dialed the hotline at work to hear the beautiful recording stating that the office was closed for the day due to flooding. And yet it never happened. The office was OPEN, regular business hours. Meaning you better get your butt over there or you-know-what will happen.

And yet Con-Glom-O remained open. Most people, myself included, could not get to work that day (and I actually did try). We all had to take an unplanned day. Later they changed that to "planned" but we still had to take a whole day out of our own vacation time.

i just realized that i never commented on this ... i had started to and got distracted. lol! i remember when that bad weather hit last year ... remember you talking about how bad it was on the roads. i can't believe your company is like this though. what a stupid and senseless rule. maybe you could get some sort of emergency helicopter that could air-lift you from your house to your work. could be a tax write off for work purposes too! lol!

I guess there is no labor shortage there, that people will sacrifice their lives, children, vehicles, etc. I do not understand.

Remember what Karen said yesterday about her kids. They will make exceptions. You do what you think is safe and don't worry about the rest. You have way more to consider than Con-Glom-O Companies are not like that here, that I have heard of, everyone thinks all that is insane. Love mom

Yeah, that one had to be the best! It still baffles me. I tried to get to work but literally EVERY road I would have been able to take was closed. They are just too much.

Yet CT gets off work for an inch of the white stuff because "They don't want to drop their diamonds in the snow". Just goes to show that they think you are depensible. I think you're indepensible!