« cleaning out my desk of motivational tokens | Main | FMLA leave »

Conglom-0 tried to kill me today. There has been a known issue at work with our particular kind of flat-panel monitors that everybody got about a year and a half ago..... basically the monitor, which is a 19" NEC flat panel, sometimes breaks off its mount and goes crashing down onto the employee's desk. Apparently the plastic pieces holding it on just gives out and SNAP there it goes.  Until now this always happens in the overnight hours, and a few people have come in to find their monitors crashed on their desks.

Well today I came in and noticed that my monitor was tipping forward a little too much. Uh-oh. I called IS and warned them, but that was at about 6:30am and the techs don't even come in until 8:00 so I just had to hope for the best. So over the next hour I sat there and watched that thing tipping towards me and just wondering WHEN it was going to happen. Those things are heavy!!

At about 7:30 it happened, and luckily I was not in the way. I was sitting back just enough that nothing hit me except the shrapnel of my pen which had been on my desk. It was shattered into a hundred pieces when the monitor hit it. Everybody came running over to see if I was okay, and not startled into labor. LOL. Some people joked that maybe it scared the baby enough to make him turn the right way! Oh if only.

My friend Joanna documented the carnage with her camera phone: 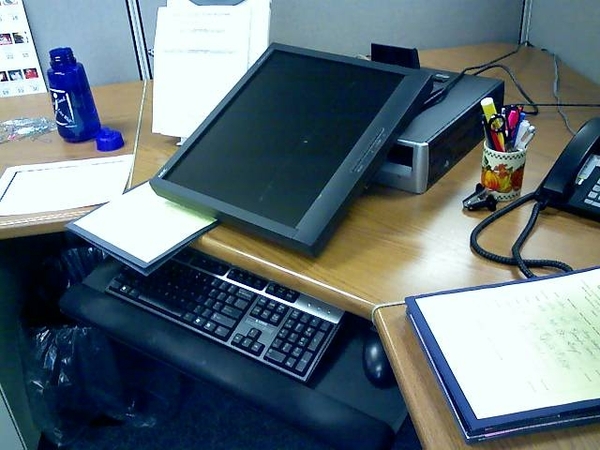 Nothing surprises with that place. Nothing. I am glad you and Drew were not hurt in this.

aren't you having a baby in like 9 days?!?! what ever happened to getting 4 weeks off before your due date? lol! just curious now that i'm thinking about it!

glad to hear you and baby are all right! good thing you were back just enough. and i'm only saying this because noone was hurt ... but that's pretty funny. lol! never known screens to come crashing down!

Thank God it didn't hit the baby, or hurt you. When your equipment falls apart, you know it's time to leave!