Today we ventured out with Drew to the Deerfield Fair. We are getting sooo brave with taking him places, I take him regularly to the grocery store and Target these days, no biggie. Anyway, we took off early-ish this morning at 9:30 to try to beat the crowds and traffic. The weather was gorgeous at 70 degrees, low humidity and lots of sun. Bad for photos, though. 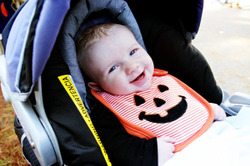 Drew did so great and slept on the way there, and the only time he really got upset was when it was time for him to eat. That was frustrating because there is nowhere for parents of little kids to feed/change/sit down with them at all. It was kind of annoying. I had brought two bottles of breastmilk for him, and tried to feed him standing up because there was nowhere to sit but he did not want to take that bottle. I think he was just waaaay overstimulated and worked up, and kept looking around at everything (the trees are very fascinating apparently) and would not eat. So finally I just had to cop a squat on some tree roots and cover myself with a blanket and feed him the good old fashioned way. Then he was fine (after barfing it all up all over Dave) and rode around a good while longer with no protest, dozing on and off.

Our fair food choices of the day?  For me it was Cream of Broccoli soup in a bread bowl, and a $5 root beer float.  I thought for that price they could have put some rum in it or something, but apparently not. Also I got an iced coffee on the way out but the lady put so much cream in it that I couldn't drink it. Bummer. Dave enjoyed onion rings, a cheeseburger, and fried dough. 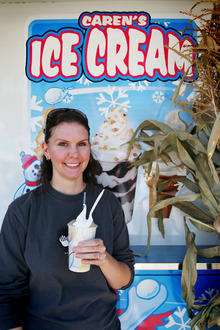 Great fun! Glad to hear he's getting out!