Why did nobody tell me about this??

I cannot believe that I only just found out about a Tim Burton movie less than a month before its release. I am disgusted with myself. I was sitting here on my computer last night doing God knows what, and Dave turns to me and says, "Are you paying attention to this," gesturing to the tv behind me. I turned around and caught only the last few seconds of what was unmistakably a Tim Burton movie trailer, with all the old folks present like Johnny Depp, Helena Bonham Carter and a NEW guy to the Tim Burton world, ALAN RICKMAN!!!  Now the TB family is complete. I have thoroughly enjoyed Mr. Rickman for some time now, in all the Harry Potter movies, Dogma, Love Actually and probably some other things too.

Something thrilling to look forward to. I am SO there. Apparently Sweeney Todd is a "real" fictional character from old 19th century English penny novels. A barber serial killer, LOL!  I don't know, somehow seeing that trailer suddenly made me think this movie is gonna be all Edward Scissorhands/Willy Wonka with the dark and gray ambiance of Sleepy Hollow. Not that there's anything wrong with that. 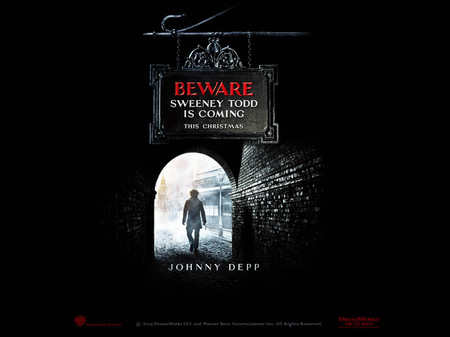 I just heard that Tim Burton is planning to do a remake of Alice in Wonderland with Disney.......should be interesting

yea, i too am amazed you didnt know about it, I heard about it a few months ago. I was sure you were on top of it. And yes, its a musical and fairly twisted from what i hear. Im glad Burton is finally doing something original again....the remakes are a waste of his talents i think....

I saw it a week or so ago but thought you would know!

I am disappointed in ALL of you for not telling me about this. :)

Sweeney Todd was orginally a musical starring Angela Landsbury! (That tip come from a college course on musicals)

I saw a trailer for this a looooong time ago... it looks SO FREAKIN GOOD!

You were the first person I thought of when I saw the trailer a few weeks ago...
LOVE me some Alan Rickman- his voice is awesome!

OMG - this movie looks great - did you know Johnny Depp even SINGS in it??? he is already sexy and now he sings too!!!