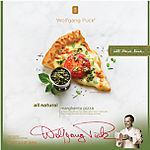 Today I tried something new.... the Wolfgang Puck All Natural pizza which at my store is located in the "natural foods" freezer section. I have to say that I would NEVER in a million years buy this at full price which was $6.99 [coughcoughchoke] but I was able to get it for $3.49 with sale and coupon, so I figured that was pretty good. Or as good as it's going to get anyway....

(Keep in mind that Dave and I usually buy the $2.49 store brand piece of crap frozen pizza. I hate pizza so it doesn't offend me to eat crappy pizza. :)

I had the spicy chicken variety and it was delish. You know you're onto something when you read the ingredient list and there's not a single chemical listed, just good plain ingredients, all of which grow in the beautiful earth. How refreshing! What a concept!  Everything was pronounceable.

Even when I cooked it, and it came out of the oven, instead of a puddle of grease in the middle like you get with regular frozen pizza, there was a small pool of olive oil. Yay!  It's a pretty small pizza, it fits onto a dinner plate, so I just ate half of it and was satisfied for lunch. Leftovers for lunch tomorrow!

Anyway, I really liked it and if you can get it for a good price I think it's worth the small splurge. 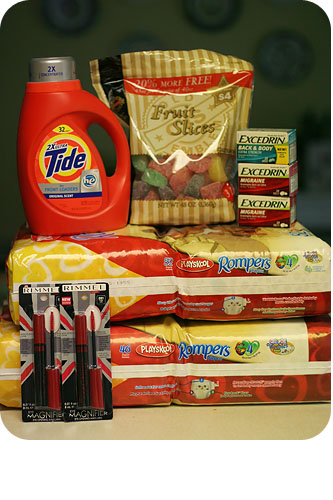 was my total for all of this you see here.  I did two transactions as follows:

Then on the way home I stopped by Taco Bell for lunch and got a Fresco burrito supreme w/ chicken and it cost $2.91.... more than all the diapers and stuff I had just bought! That really puts it into perspective.

......ironically dumb ol' me forgot to use my coupon for a free Fruitista freeze at Taco Bell ;)

Had a good trip to the grocery store this week......

French's yellow mustard is on sale for $1, and with a 50¢ coupon it doubles to free!

We had a pretty serendipitous day yesterday. We noticed around 6am that our neighbors were having a party! They had all their lawn chairs lined up down the driveway, and a kiddie pool set up... and people were showing up before 8:00!! We were like, what the heck?? What kind of party starts that early? Soon it dawned on us that it was not a party, it was a yard sale! Duh.  Anyway, we're a little sad that our neighbor is moving because that means we have to stress about what kind of new family is going to move in. Yikes. Anybody want to be my neighbor? The house next door is for sale!!

At the same time, since we were getting all this new traffic by our house, I said to Dave "I have half a mind to take x, y, and z to the end of the driveway and put a FREE sign on it."  So we put 2 items out that are just taking up space and we don't use and I swear they were gone in about 10 minutes. We were thrilled to get that stuff out of our house! 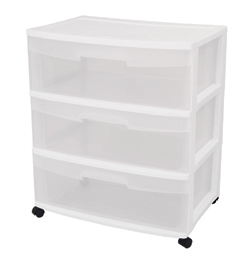 So I went over there to see what we could find, and I got a twin bed headboard/footboard and rails, perfect for Drew's future big boy bed. And also 2 of these Sterilite storage bins, all for $10!  I am psyched.  THEN later that night they took everything that didn't sell and piled it at the end of their driveway for free, so Dave and I went after dark and snagged another twin headboard and some tomato cages.

When I came back to NH from NC on May 14, spring had finally sprung!!  I was pleasantly surprised to find the leaves out on the trees, I caught the last of the forsythia blooms, the last of the single late tulips, flowering trees were out everywhere, lilacs had just started, and all my perennials were so much bigger than when I left. I've been super busy, still working on mulch and my order of 25 hostas came while I was gone so I've been working on finding homes for those. I had a big burning bush in front of the house die over the winter, so we took that out and I scoured the ends of the earth to find a nursery that carries more of the same kind of inkberry that I needed to fill in the hole and match other existing shrubs. So after moving one of the barberries, and planting the 2 new ones, the front bed is finally done!

Here are some recent pictures, left to right: crab apple blossom (in my neighbors' yard), lily of the valley, foam flower, sweet woodruff (I want this stuff to spread everywhere), and bugleweed. 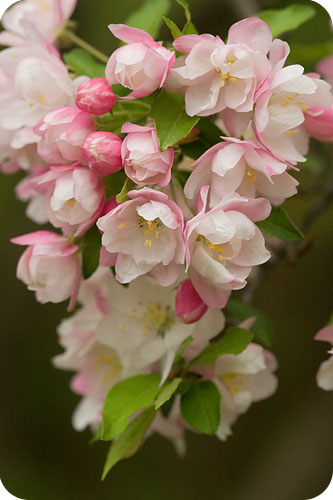 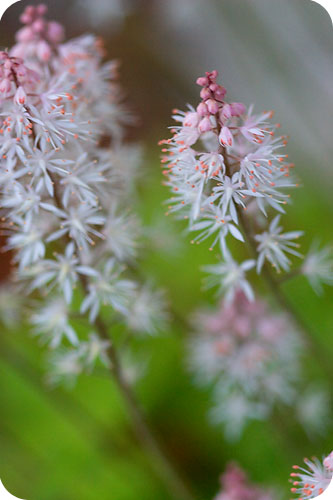 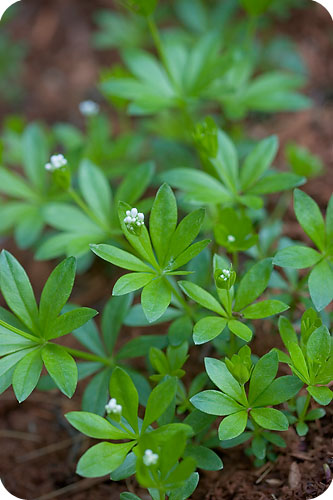 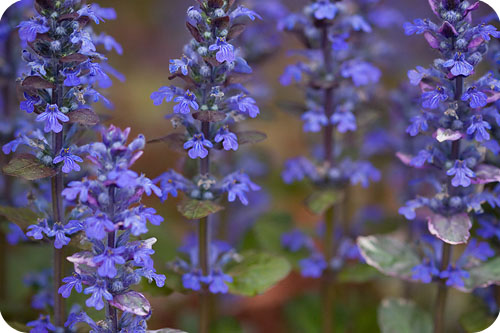 Drew is a jet-setter

<panting and gasping> Can I possibly catch my breath long enough to do a blog post? I swear it's been impossible to find time to spare to do this. On Wednesday night Drew and I got back from an eight-day stay in beautiful North Carolina! We had an awesome time with my parents, and I have to say that it was soooo, so special to me to bring Drew to the place that is always my true home.

I flew by myself with Drew on my lap--which I would NOT recommend to my worst enemy--and he behaved as a typical 11 month old would. It really did suck unbelievably and I will never do that again until he is older. Luckily the next 2 times I will be going back home I'll have Dave with me and that extra pair of hands will make all the difference. One woman can only carry 1 baby, 1 stroller, 2 large bags, etc for so long!!!! 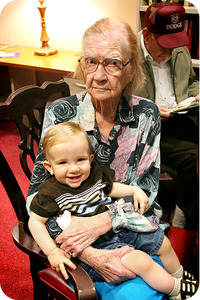 This is what it was all about. Ever since I moved to NH in 2001 I have made it a priority to get back home every year for my Grandma's birthday on May 10th, and I have been successful in that for most years. Last year I was too pregnant to travel so it has been since Feb 2007 that I have been home which is way too long. So many things have changed since then. My Grandma has been diagnosed with Alzheimer's and she's been living in an assisted living facility since just before Thanksgiving of last year. This whole turn of events has been hard to digest being so far away and unable to help in any way, but I'm sooooo thankful she's finally getting the help that she needs and is finally safe from accidentally hurting herself. I finally got to see her again after a year and a half, and she got to meet my son and enjoy holding him. This was so important to me. She still knows who her family members are, and I'm grateful for that. 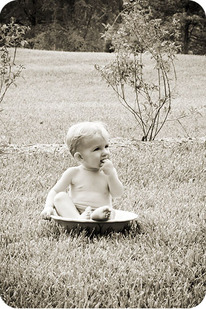 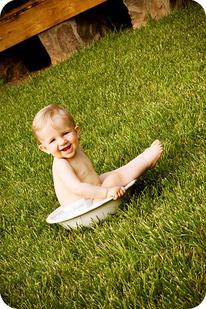 Another very special moment was taking Drew's picture in this bowl which is really just a chamber pot!  It's quite a family heirloom. Apparently there is a picture somewhere of my mother's father sitting in this very bowl when he was a baby (which would have been in 1920) and then the bowl changed homes and passed some time and finally it came to pass that I had my picture taken in this same bowl, in 1978. And here we are 30 years later with the great-grandson sitting that very same bowl.  One day those pictures will turn up and this sequence will have much more meaning, but in the meantime you just have to take my word for it that these pictures do exist!  I was hoping he wouldn't be too big at this point for it, and thankfully he fit just right.

We had good eats in NC!! As always. Our restaurant patronage was a little limited due to the Drew but I still ate good. Most notably was CHIPOTLE!!!!  Dave and I ate there once, in a former lifetime in Las Vegas, and never since then since the closest one is like in NYC maybe, not sure, but they are NOWHERE NEAR ME in this barren land. Anyway, in the time since I've been home they've managed to build MANY of them in NC (soooooo jealous) so we went 2 times in 2 days and I really didn't remember what it was that I liked about it, but at first bite I KNEW that it was just as awesome as I remembered it. Oh MY GOD it was so good. 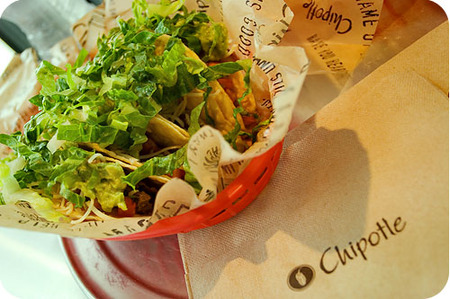 Drew also had his first trip to Sonic. I really wanted a footlong chili dog but I have resigned myself to eating whatever I can share with Drew so I just got a burger. And it was GREAT!!!  I can't wait until I time in the future when I can eat what I want and not have to share. 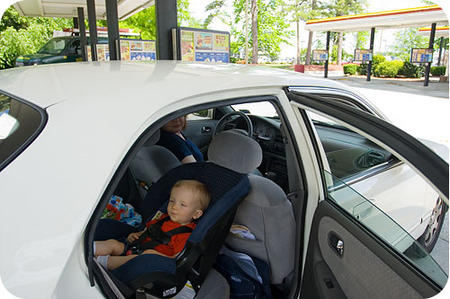 Yet another reason for traveling 800 miles: a rare opportunity to take a  photo with four generations. Getting this photo was really important to me and I don't know how often you get to take something like this so I worked it! 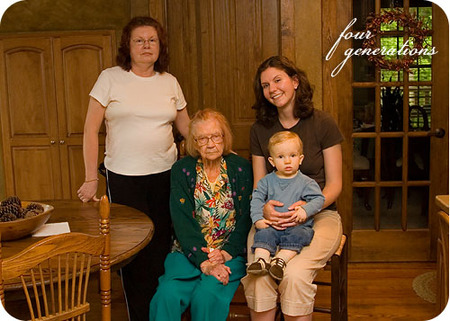 I got to see my brother and his bride-to-be Jill, and they asked yours truly to shoot their upcoming wedding! I am so unbelievably excited about this and I will hopefully do such a bang-up job. This is just the kind of thing I will be all over.

We enjoyed all the beautiful plants and weather and smells and all the great things that make NC my home. It smells so good, straight off the plane at the airport, and I never know how to explain it. One thing I have always loved is how a place smells when you first arrive there before you get used to it, when it's most obvious. NC smells like plants, moisture, humidity, growing things.... it's just amazing. Things in bloom at this time are: iris, snapdragons, a few azaleas. We went to a passed-down plant sale at the county agricultural office where I saw my former 10th grade English teacher Mrs. Kohler! She's a Master Gardener now. I love that about the place where you grew up, you always have the ability to accidentally run into people you once knew years or decades ago. It's how you are connected to a place and a community.

Drew had his first Krispy Kreme doughnut! Oh boy did he like it. That kid has a sweet tooth. It was all I could do to hold him off so I could have a few bites myself! 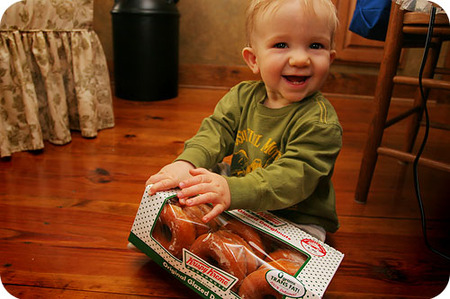 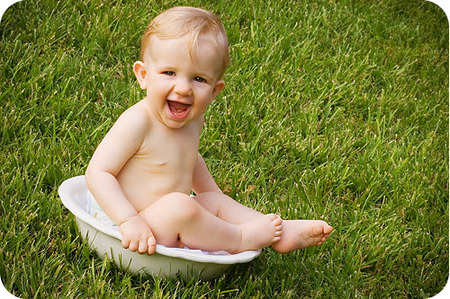 In my town he is guilty without trial, and excommunicated, extradited, and otherwise banished from the kingdom. I caught this little guy on Friday and he took a ride with us (you know, one of those RIDES.... that you don't come back from) to Kindermusik where I dropped him off in the next town over in a very nice wooded area. No sarcasm there, it is a very lovely spot to live if you're a chipmunk. And I heard others of his kind chirping nearby so he's not alone. 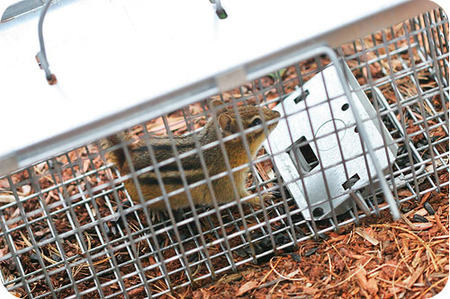