It was a fun and busy Christmas this year. Even though I'm not all that inspired by blogging lately, it seems to be the best way for me to document our family's adventures for posterity so here we go. When we were in NC Drew learned how much fun it is to rip into presents. He hasn't really had any presents to open since June for his birthday, so now that he's older it made sense to him. He ripped into his own presents and pretty much opened everybody else's too. It was very cute. :)

From Santa he got a big comfy Nod Chair which he loves sprawling out in, and a GeoTrax train set. He also got a fun tricycle from his Uncle Doug, and legos and blocks from his grandparents. 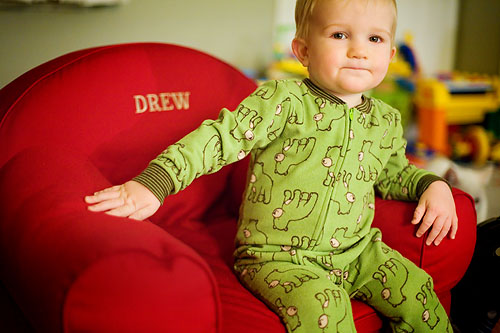 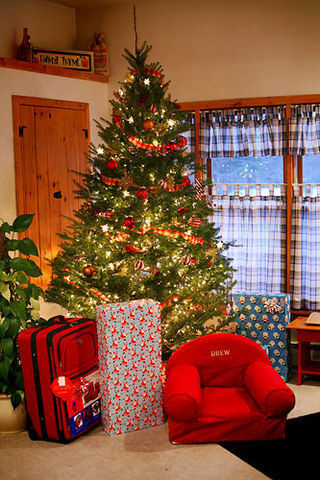 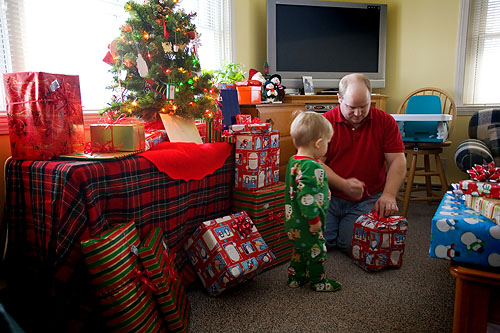 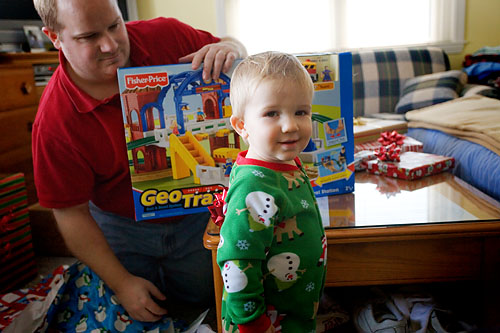 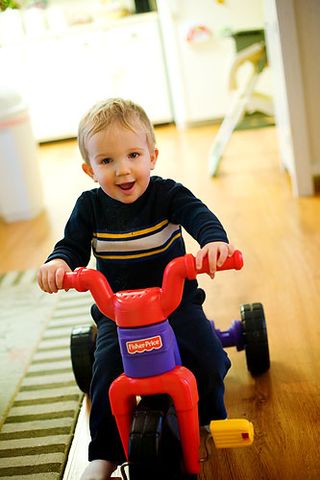 Before I get anymore behind in my life (ha ha, I say that like I'm not already lightyears behind in everything), I wanted to share some pictures from our Christmas in NC. We had an early Xmas there, and then a regular Christmas in NH so we got double the fun. 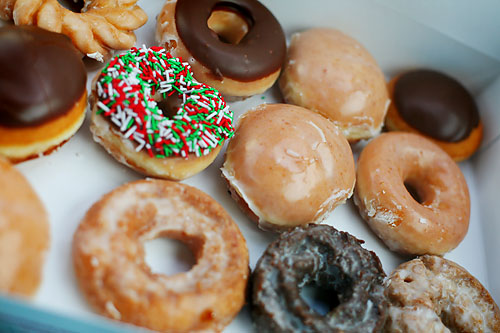 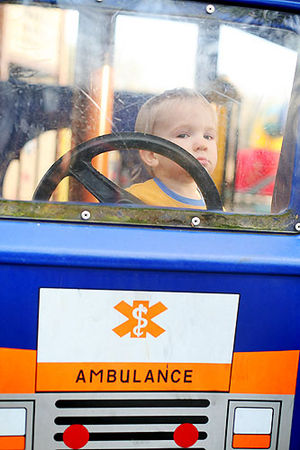 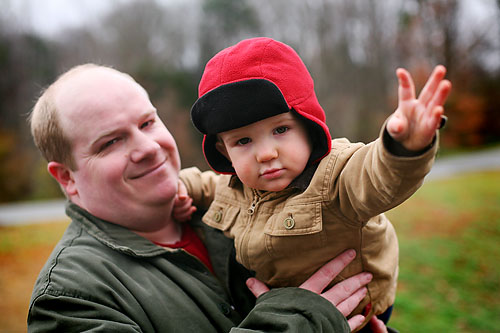 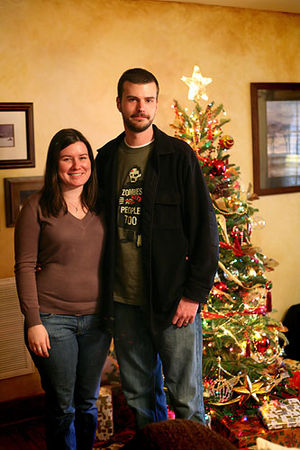 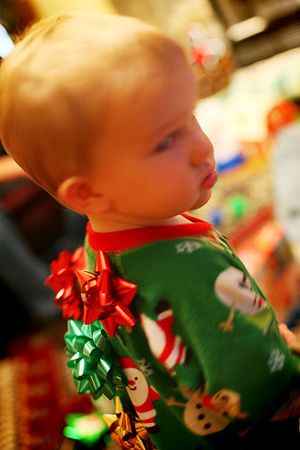 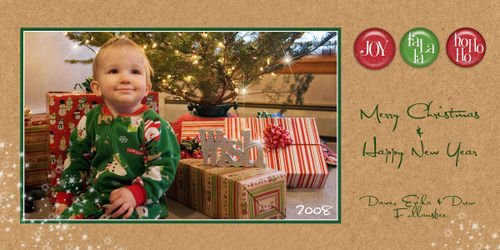 How (not) to change a toddler in an airport bathroom

On Thursday we were in the Raleigh-Durham airport waiting for our flight and after the nightmare of struggling through airport security with a toddler, a 5 month pregnant woman and enough carry-on baggage for a third world country, I had to pee. And Drew needed changing before our 3 hour flight home. So we go in the bathroom and I wheel him into the handicap stall because it's the only way I can take him in there with me without just having him sit outside the door by himself in his stroller.

So after that (he's crying because the flushing of the toilet scares him) we go out and pull down the "baby changing station" tray and I get him out of the stroller and stand him up on it. I have to make him stand up because he refuses to lay down on those rock-hard things.... so it's fine with me. If he will cooperate while standing up, it's fine. He's really good about picking one foot up at a time while holding on to me so I can slip each shoe off, and then get his pants off and each leg out one at at time. All is going well. So I get his diaper off and lean over to my bag to get out his clean diaper when he unleashes a stream right off the table and into a puddle on the floor. And he keeps going and going and GOING for like 20 seconds and I'm just standing there horrified and not knowing what to do, because I had NOTHING to catch it with. All I could do was get the stroller out of the way (which he missed by inches) and get his pants out of the way and hope he wasn't standing in it.... because I had no extra socks to put him in.  He seriously looked like one of those little Roman (Greek?) statues in a fountain, the little cherubs peeing in the reflecting pool.

So the only thing available to me was the paper towel dispenser which was one of those things that has an automatic hand sensor, and slowly spits one sheet out at a time after a few seconds. So I'm leaning over and waving at the little red light while my other hand is holding on to Drew, because after all he's still standing there on the baby changing station as the epitome of child safety.  I throw the paper towels down on the slick tile floor one. at. a. time. onto this huge puddle that had formed, and I'm standing in it, it's all over my shoes......

Finally I got it wiped up as well as I could. I felt bad but I know they mop those floors several times a day and really there was nothing else I could do about it.

Thank goodness nobody else was in there at the time while this was all going on.  I guess it's a good thing I didn't have a cloth to catch it with because really what would I have done with it if I had??  Put the soaking wet thing back in the diaper bag and carry it around for 5 hours? Yuck, no.

Dave and I want to make it a yearly tradition of contributing to something like Toys for Tots so yesterday we went to Toys R Us and had a great time. Dave got boy toys and I got mostly girl toys and we filled a shopping cart to put in the bin by the door. They were having some awesome 2-day only 50% off sales so we could really make the amount of money we agreed to spend go pretty far. It was so hard to choose! We got a couple of Matchbox race sets, a T-Rex dinosaur set, Hot Wheels cars, and a veterinary play kit.

Our least favorite part of Christmas used to be getting the damned tree. Every year it was such a fiasco of trying to borrow Dave's parents' van to go get it with (because all we had was a Corolla at the time) and then getting the stupid thing through the doorway, and trimming off the bottom, and then finally putting it in the tree stand which was a sure way to get divorced trying to get the tree straight. UGH!!! 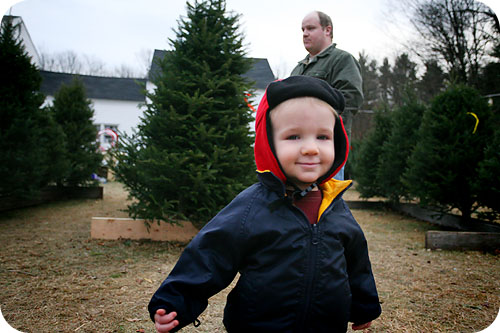 But this year we got it together.  With the Rav4 we didn't have to borrow any vehicle. They run the tree through the little net loop which held  the branches together nicely so it just went right in the house with no trouble. We got a new "swivel stand" for the tree where all you do is step on the little pedal and swivel it around until the tree is straight and it takes seconds. 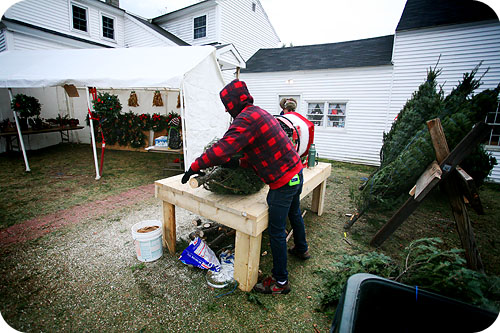 So all in all it was a pleasant and uncomplicated process. Drew even had fun there because there was a golden retriever running around which he loves and is normally too shy to approach but this time I helped him pet the dog and he was just tickled to death. 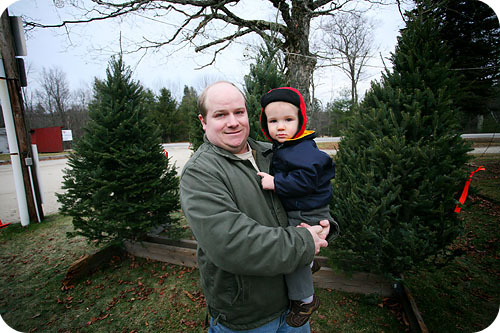