Portrait of a Family 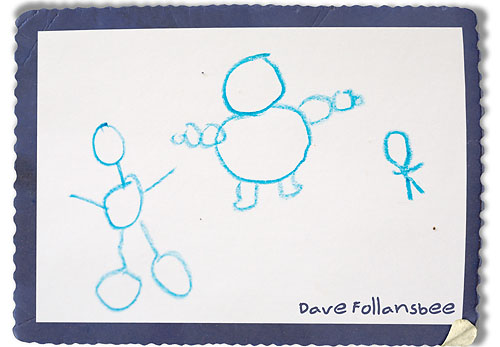 I came in the room after Dave was coloring with Drew to discover the funniest little self-portrait that Dave had drawn in crayon of the three of us. He cracks me up. Allow me to describe some of the subtle nuances going on here:

First there's me, with a big baby belly. The big round feet are not shoes, those would be my huge swollen ankles. Gah!!!

Next is Dave, with short legs, round belly and big bulbous head.  I think he said the arms represent his rippling muscles. :)

Finally the little one is Drew, the small big-headed child.

Well I just about fell over and died from happiness today in Target because I found TIM TAMS!!!  They are this amazing little cookie that they have in Australia that I ate waaaaaaayyyyy too many of when I was there and haven't been able to find them here in the US since then. No wonder I gained so much weight there. I ended up having to keep them in the freezer so I couldn't eat them as fast. I have a picture of me doing the "tim tam slam" somewhere....

Anyway apparently Pepperidge Farm now is marketing them here and all I can say is holy TROUBLE! 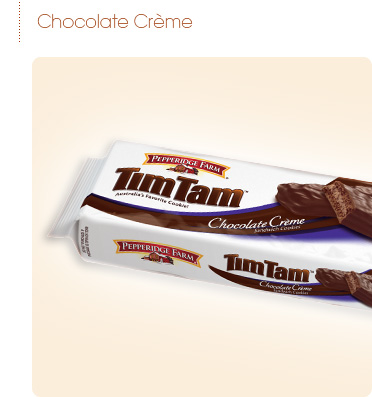 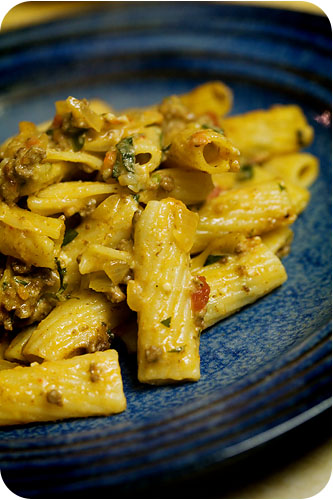 I had a hell of a time finding something as simple as smoked cheddar for this recipe. I hate Shaw's. I hate them. Every time I go there I find myself asking "Self... WHAT are you doing here. Why do you come here?" So there was no smoked cheddar to be found in the entire store so I had to improvise. In the "fancy" cheese case I chose some Cabot chipotle cheddar and I also threw in a big chunk of smoked gouda to mix in with it since I needed some smoke flavor from somewhere. Obviously chipotle is smoky by definition but I wasn't sure how strong the taste was.

Turns out it was waaaaaay too much chipotle (when added to the two tablespoons of ground chipotle already in the recipe) and therefore it was much too hot to enjoy. I love heat and all, but this just kind of overpowered everything and made our stomachs hurt. Oh well. I guess I should have went with plain cheddar and smoked gouda, I think that would have been just about right. Or better yet, maybe if I try this one again I'll actually use smoked cheddar.

Ever since after Christmas I've been on this spree rampage with throwing stuff out, organizing, filling box after bag of stuff to take to Goodwill. Part of it is just nesting; I have an insane urge to really fix things up and make room. Part of it is the appeal of the new year, and a new beginning. It's a great time to start off fresh. Part of it is just sheer practicality because we have our whole office room that must be gutted out to become the baby's room.  I still have 3-ish months left but there is a LOT to do.

Last week I took the most recent load to Goodwill and the car was FULL. But sadly it is really kind of hard to tell that we've done anything!  But then I got to thinking about it and realized that all that stuff that we got rid of has just been replaced lately by all the BAGS and BOXES of clothing and toys that we have accumulated since Drew was born. The more stuff that goes out, the more stuff there is right behind it that is for Drew, either future things he has yet to grow into or past things that he's outgrown that we have to save for the next one. Oy.  So it's kind of one step forward, one step backwards.... but at least there's a lot going out regardless. I think if I just keep at it soon I'll start to see progress.

This will go down in history as the worst weekend EVER

It was a horrible weekend starting with Friday afternoon when I got sick and started puking and everything else, I mean the WORKS for about 7 hours.  The rest of the night I couldn't drink anything, even water so I got pretty scared about the baby. I have never been sick while pregnant so I wasn't sure what kind of effect that would have. So Dave called the on-call doctor and she assured us that I could go 24 hours without keeping any liquids down and the baby would be fine.  Luckily it didn't take that long and I could finally take some sips, although not many, even the next day. I had nothing left in me.

But then after laying around lethargically the next day, suddenly Drew and Dave both started puking everywhere about 8:00 that night and here we went again, another night of mopping up puke and not much sleep. It was terrible. I felt so helpless with poor Drew, he has never been sick before and it really scared him to throw up, he just didn't understand what was happening. And because of ME being sick, we were behind on laundry, and had no clean pjs to change him into, no clean sheets for his bed.... it was rough. But we got by, after going through almost all our towels, blankets, dish towels, anything that could be used to mop up puke.

So that is the heavily abridged version of our 48 hours of torment..... it was actually much worse than it sounds. Sunday was spent laying around, trying to nibble toast and sip some liquids. Drew still doesn't feel right and has been very clingy and doesn't want to eat much. But the crazy kid won't just sit down and chill out, he doesn't know how to relax. He just wanders around and makes me or Dave go around with him.

#74: Turkey or Chicken Croquettes with Spinach Mashers and Pan Gravy 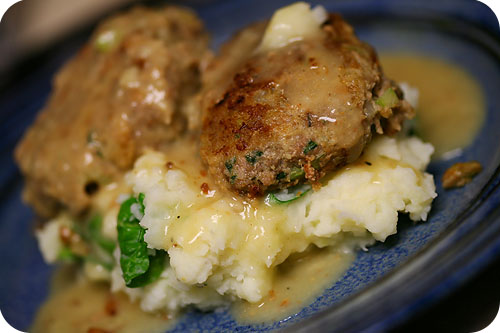 Oh man was this one GOOD!!!  It was just delicious. I decided to try it because I didn't think I could screw up meat and potatoes and I was right. :)  I don't know what else to say about it other than it was soooooo yummy and Dave and I both purred over it. It took me about an hour though, again. I think I just suck. 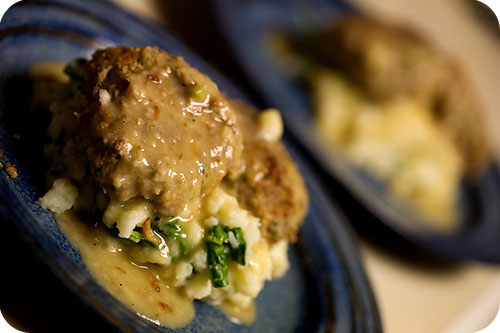 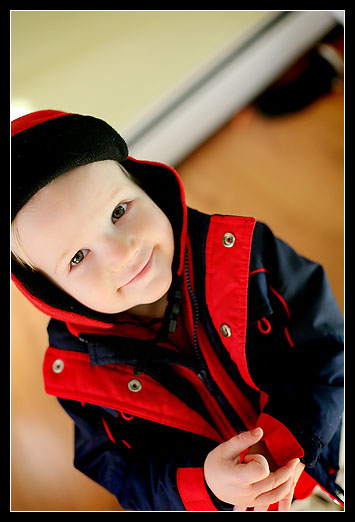 all bundled up ready to go to Target 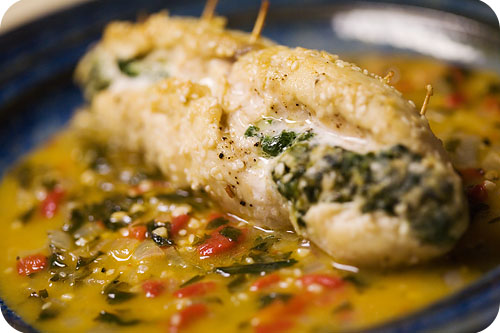 More from the Rachael Ray book.....

Not the greatest picture ever, since meat is sometimes hard to make look appetizing in photos (also I hate the overhead flourescent light in our kitchen).... but you get the idea. These were good but HOLY NOT 30 MiNUTES!!  It took me an hour if not more, it was crazy.  I wasn't nuts about the sauce at first but it really grew on me and I decided was really good with the chicken. Like all her recipes there are 1001 flavors going on all at once and it's a party in your mouth. Mmmm goat cheese.

Yes, those would be vegetables floating around in there......

From the back, I look normal and not pregnant. But from the side -BAM!- watch out. I can knock you down with this thing.  23 weeks. 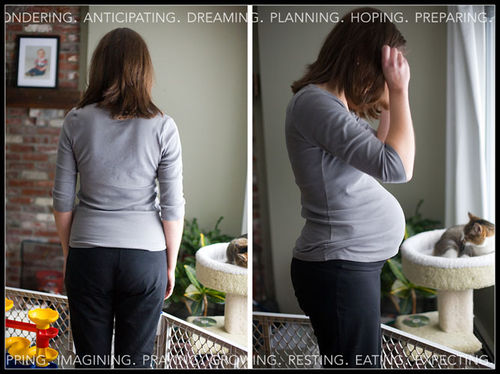 Compared to my first pregnancy I have done a terrible job at documenting this journey and taking notes along the way. We've hardly taken any photos and have done next to no planning as far as the baby's room goes. Oy!  So here I am at 23 weeks and really have nothing much to show for it other than some impressively heinous varicose veins, splotchy purple legs, and a huge belly. So I realized I need to blog some things because if I don't write it down here, it won't get recorded anywhere else and will get lost to time. I need to do better!  This little boy certainly deserves to have his beginnings remembered.

The first trimester was rough as usual but in some ways it was harder than with Drew, and some ways it was easier. Harder because I was chasing around a toddler while feeling sick, but a little easier because I could take a nap every afternoon when Drew was sleeping. I couldn't do that when I was working at Con Glom O (not with my eyes shut anyway).  A little midday nap definitely went a long way towards helping me feel better.

I remember my sense of smell being very sensitive, like last time, but the triggers were different. Things like road paving back in the summer would make me feel sick, and trash smells were bad. Probably the worst thing was the smell of chicken patties cooking in the oven.... we give those to Drew sometimes and they would REALLY make me want to hurl. So he didn't get those for a couple of months. I couldn't even look at them in the store.

Once again I had the awful saliva issues that I had with Drew.  The medical term for it is called ptyalism. The morning sickness only lasted a few weeks, but the constant spitting, always having to chew gum in public to keep from spitting, spitting into napkins in the car.... UGh all that lasted until 17 weeks. It just built up and if I didn't spit it out it would make me gag and eventually throw up. Truly disgusting. But just like last time, it pretty much went away overnight and then I was fine.

My blood pressure has been great. I haven't been on medication for it since I had Drew and so far it hasn't acted up. Also my weight gain has been much more reasonable and that makes me happy. I started out in a better place than I did last time, and also chasing around a toddler helps a lot to stay active. Of course I ate waaaaaaayyyy too many desserts over the Christmas holidays so we'll see how much I gained this month.

I felt this one moving around way earlier than I did with Drew.... I thought I felt something going on in week 16 but thought surely that was too early. Then the next week, the day after Thanksgiving, it was ON, and he's been breakdancing in there ever since. Not only can I totally feel the kicks from the inside now but I can actually watch my belly jiggle around. So can Dave.

On December 10 we had our ultrasound and found out we're having another boy! So here in the new year we need to give some serious thought to turning our office room into the new baby's room. We have done no real planning, I have no ideas for nursery theme (not that he needs these things but since it's the last time I'm doing this, I want to make it special), or a name (which he does need), or anything like that. I do know that I have lots of stuff from Drew that we can use again which works out so well and there's not much that we need to buy. Just a few things that either we didn't have the first time around and wished we did, or things that didn't survive use and/or storage.