Drew just completed his first swim lesson session which was four weeks long. He came such a long way!  The first day he freaked out about the locker room (he has a fear of public bathrooms for some reason), and it was his first time in a shower so he was unsure about that too. The good news is that he has never been scared of the water and he let me carry him right in, and was willing to blow bubbles and put his face in the water, and "jump" assisted off the side. The second and third weeks he was fine with the locker room, but was kind of whiny in the water and didn't really understand what he was supposed to be doing. Finally on the fourth week he started showing some signs that he was getting it!  A few times he made swimming motions with his arms, and did some kicking with his feet. He also held onto the wall and blew bubbles. We're making progress. 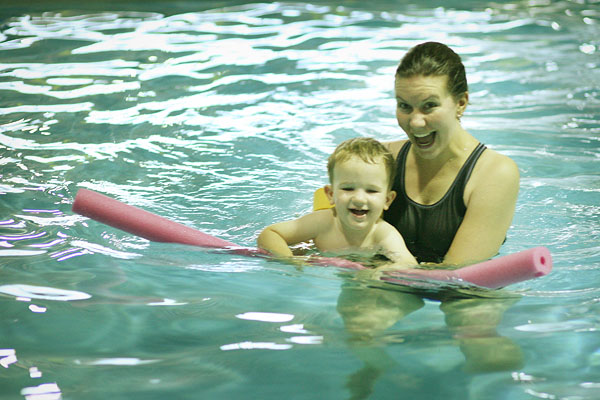 We started doing some time out with him in the past couple of weeks. We've never had much of a problem with disclipline in the past, normally just telling him to quit whatever he was doing was enough. But lately the temptation of chasing the cats is just too great, and he can't stop himself from doing it no matter how much we yell at him to stop. So we started doing time out and he got it right away. He still chases the cats, but he seems to know that he's doing something wrong and will give us a guilty look when he does it, like he's thinking twice about it. But he still doesn't have much self-control about it so we'll keep doing the time out. :) 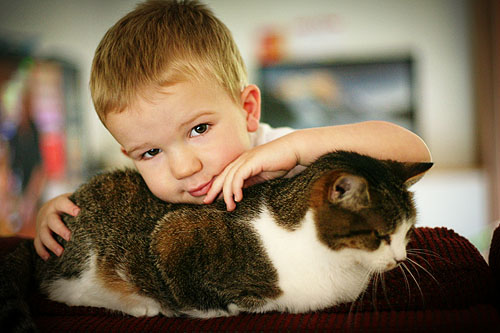 Jumping, jumping, jumping.... the kid is obsessed with jumping right now. As a form of transportation, and an activity. He travels all around the house by hopping (could be BE any louder??) And now is liking to jump OFF of things, like the big boulders in the yard. He is surprisingly sure-footed but I still am careful to keep a good eye on him. 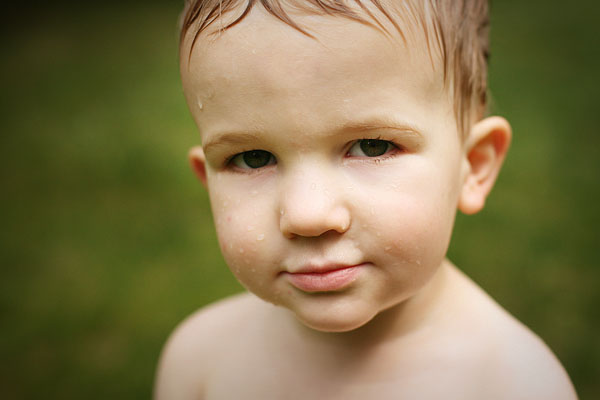 So he had his evaluation a couple of weeks ago, and they decided that he is indeed significantly delayed and eligible for continuing speech therapy services once a week. They couldn't find any specific reason for his delay, other than he just doesn't seem all that interested in it yet.  Probably being in this home environment also doesn't provide much of an impetus for him to talk, either. They said probably if he were in daycare or something like that he'd want to talk more just to get his point across, but here at home where Mom takes care of everything he doesn't really have to work for it.  On Tuesday mornings his speech therapist Annie comes to our house and does play therapy with him. It's really cool how quickly he picks up on things!  She's having us do some signs again (which we started to do when he was a baby but gave up on a long time ago..... now he seems a little more responsive to it). 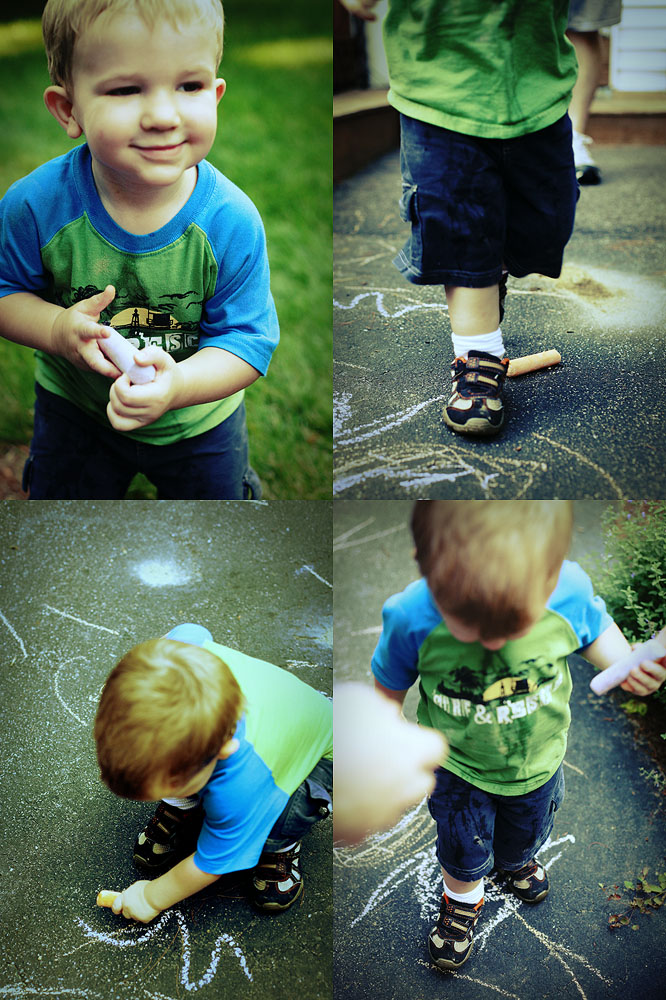 Had some fun things happen this week.

Yesterday at Target I saw the most incredible orange bodysuit for babies..... the colors were so saturated that I saw it from across the store! I grabbed one in 6M and brought it right home to wash and get Parker in it ASAP!  I haven't bought him many new things at all since I have bags full of stuff from when Drew was a baby, but this I could not resist!  You can only look at blues and pastels for so long before you need something BOLD!  With ROBOTS!

Sadly, when I put it on him I realized he's so big that it's not going to fit for very long. It does fit, but its days are numbered. So you know what we did? We went back to Target today and picked up the 9M size so I can enjoy the orangeness a little longer.

Today he started smacking his dangling toys on his play gym with intention! He amused himself for about 15 minutes batting the penguin and looking with great interest at how he was doing it. 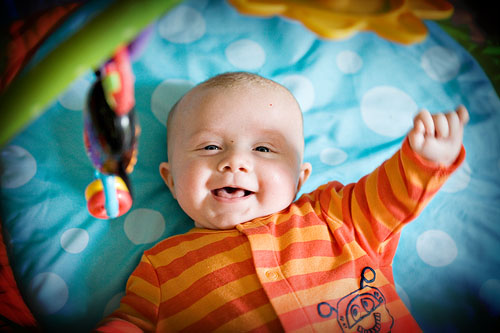 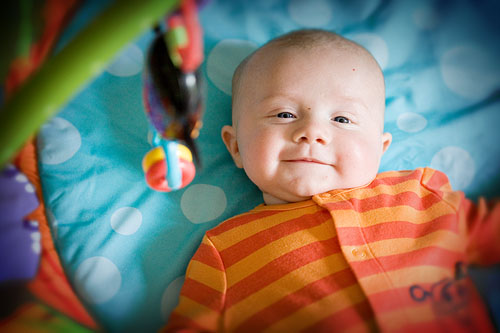 In other cuteness, I was burping Parker today on my chest (unsuccessfully, in that instance) and I looked over and Drew was sitting on the couch with his little baby Elmo doll holding it to his chest and patting it on the back trying to burp him. ♥ I could have died, it was so sweet.

Time for the sprinkler!

We had a beautiful weekend so we broke out the sprinkler and even though the water is frigid out of the well, Drew didn't care much. 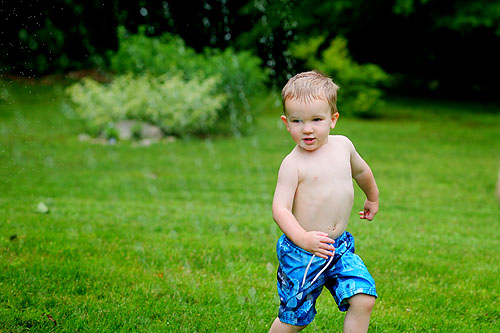 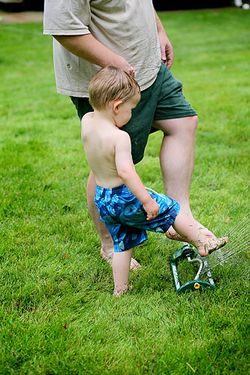 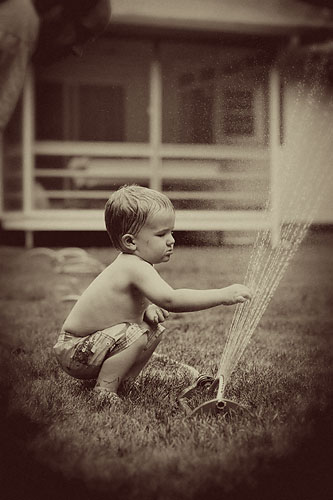 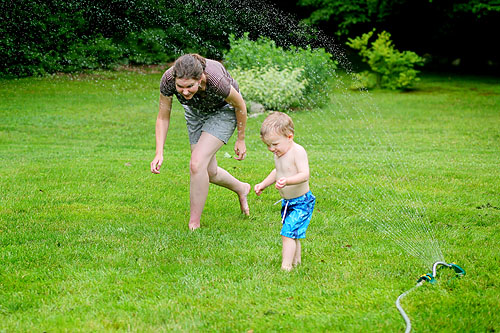 Drew enjoys putting stickers all over things. Including his brother, apparently. 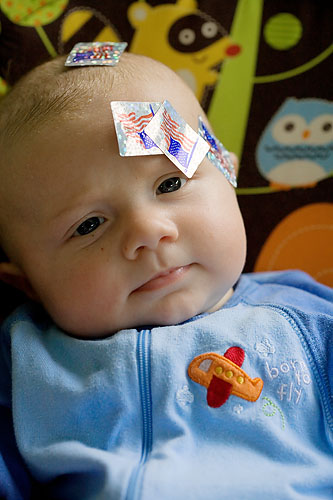 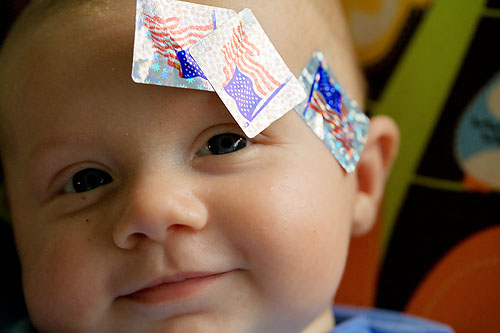 Our July 4th was pretty low key this year..... with a new baby and all we pretty much have to stay home a lot of the time so we didn't do anything wild and crazy. Maybe next year!   During the day Drew and Dave played outside for hours and Drew's favorite thing right now is the water table he got for his birthday. This thing is GREAT!! He could just spend all day splashing in it if we let him.  I was remembering that back when I was a kid, our "water table" was a plastic trashcan filled with water, and my brother and me playing with our little plastic Care Bears in it, in the middle of the driveway. It was the BEST! I look forward to when Drew can play with his little brother too. 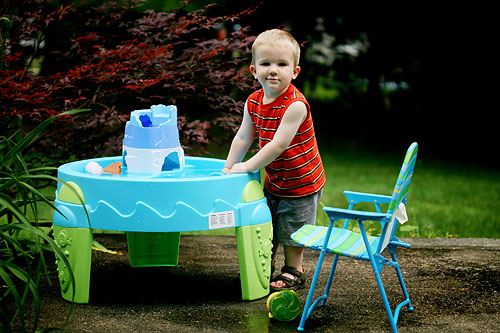 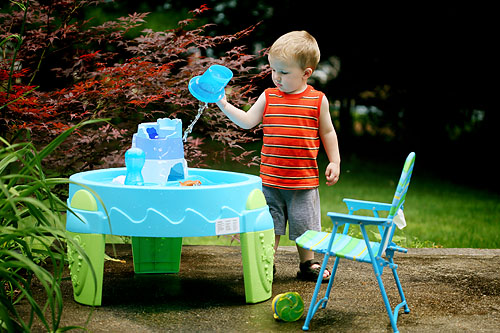 So that evening we went to Dave's parents house for a cookout and had a yummy dinner there. My mother in law made us THIS so I took a break from my "diet" and indulged a little. Trying to lose some pregnancy pounds means much less caloric fun these days, so this was sooooooo worth it and much needed! 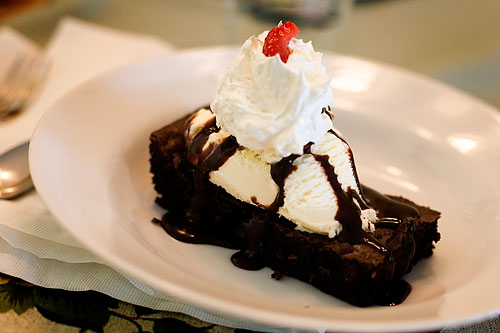 Dave took these pictures of me and Parker, good job sweetie!  Time is flying so fast with him and momma needs some pictures with her baby!  Aren't we festive in our red, white and blue? It wasn't even planned! 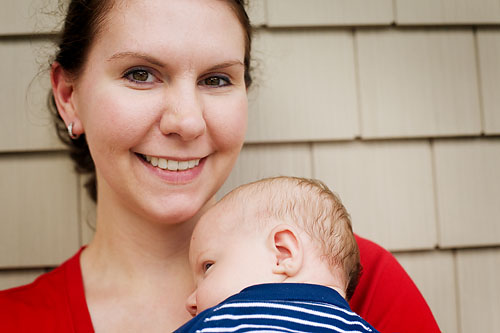 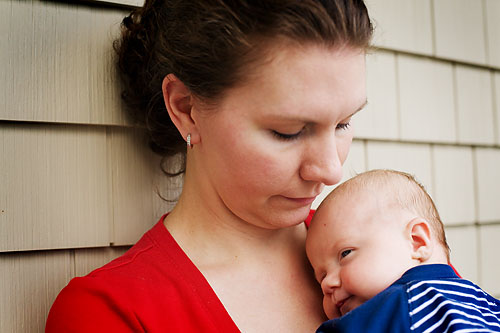 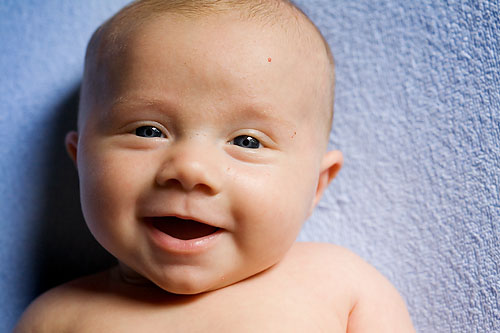 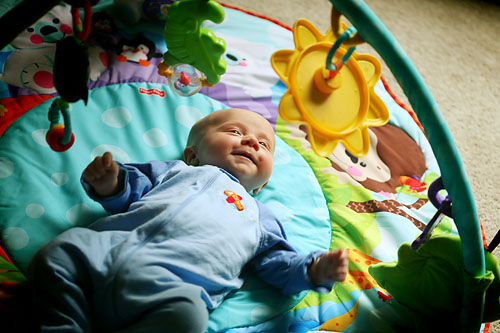 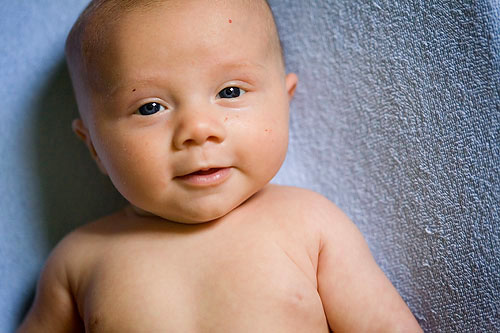 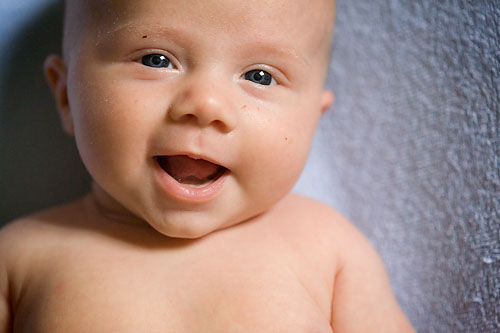 On June 19th we had Drew's 2nd birthday party here at the house and in many ways it was a lot like last year's party since the same people were here, but in other ways it was much different!  Like Drew is walking now and he was able to open his own presents, and oh yeah . . . . he didn't throw up upon looking at his cake this time!! :) LOL.  We had Grammie and Grampie here, and Aunt Dawn, Nate, Meagan and Abby, and Uncle Doug.

We got the cake from Just Like Mom's Pastries in Weare and it was delicious as usual.  She did such a great job last year that I used her again and we were so happy with it.  The "theme" of the party, if there was one, was THE DOG and we got plates and napkins with cute little doggies on them. So I had the cake made in coordinating colors of lime green and bright blue. The little decorations in the icing are supposed to be paw prints. 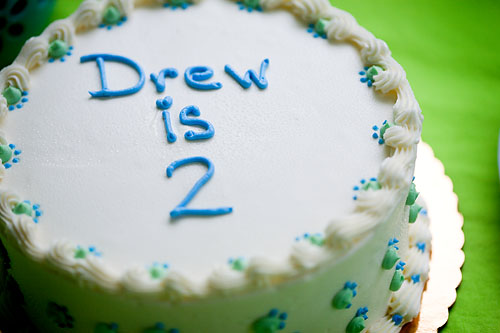 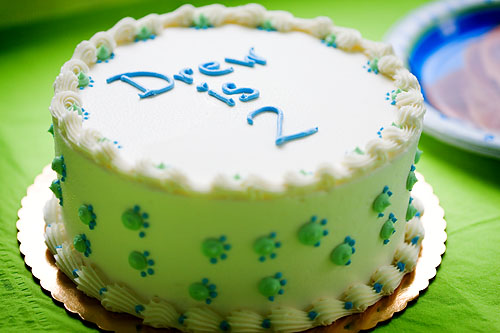 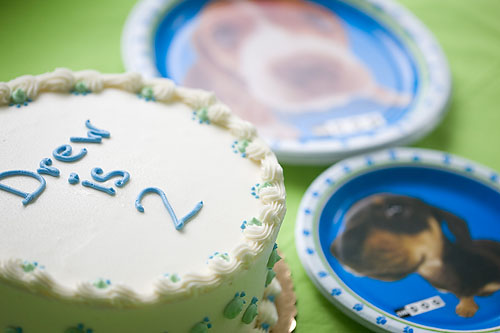 Drew was so excited this year, having so many people here. He just loved his cousins and couldn't stop running around and playing with everybody. He got some great presents too!  He got a water table, a bubble-blowing lawn mower, a tee-ball set, a soccer net, a size 3 soccer ball, a dump truck, a couple of DVDs, a spill-proof bubble cup, and a Thomas the Train tent. Being a June baby is so awesome because of all the great summer toys that he can play with. 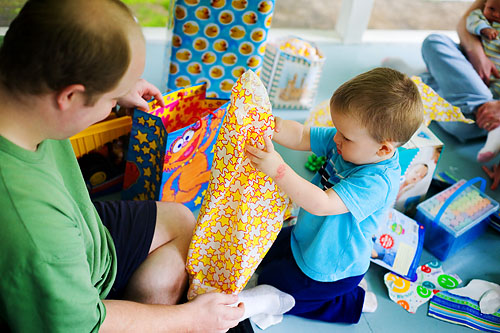 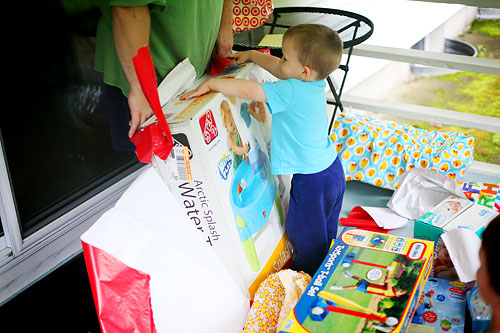 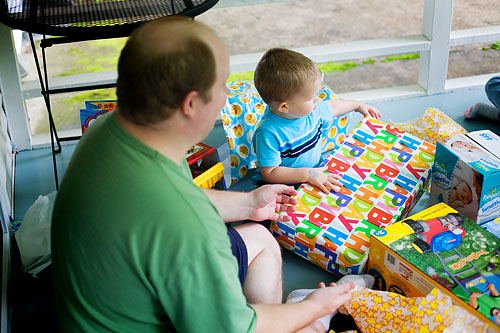 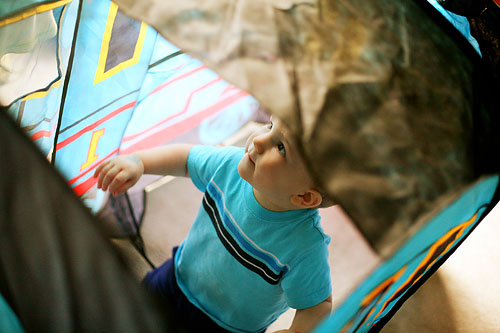 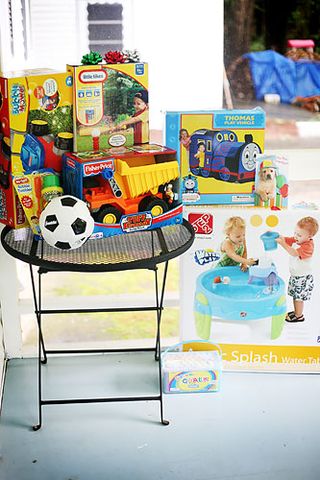 We got lots of pizzas from Pizza Hut and had cake and it was a good time. Drew ate his own little slice of cake but I couldn't get him to look at the camera and smile for anything!  Most of my pictures of him these days are of the back of his head, so I'll take what I can get. 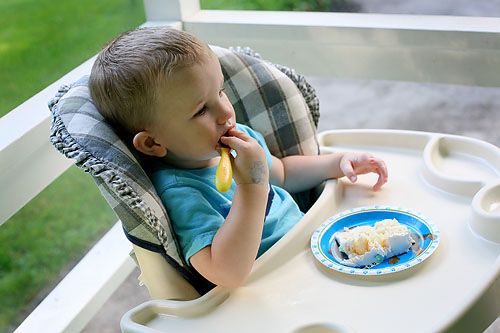