Just a quick update on Drew's signing.... he's still adding to his sign vocabulary fast & furious.  We're up to 70 signs now and still going strong. His latest favorite is "dirty."  It's just crazy now that we can show him a sign one time and he memorizes it, and will bust it out at the strangest times and we don't even remember teaching it to him. It's hard being an old and dumb adult. :)  I can't keep up with these young whippersnappers. 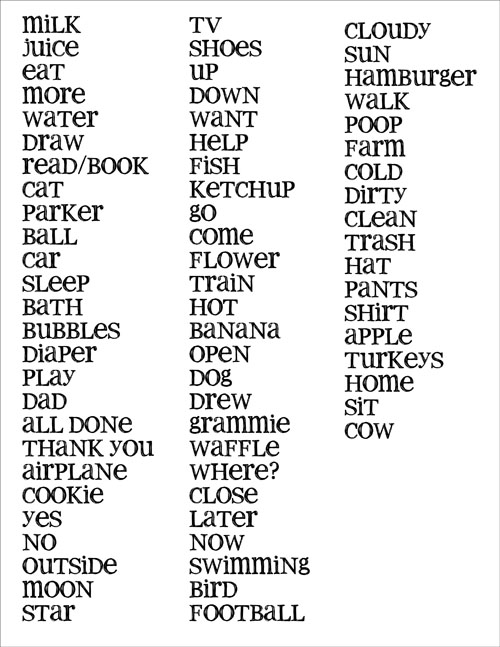 How many times do you have a first Halloween?  Just once, and I don't even wait until October!! I wanted to document all of Parker's adorable Halloween outfits. He's a good sport (guinea pig?) to put up with my whims. I did all these pictures on different days, since his baby union labor laws allow me to use him only 20 minutes a day. I finally took the time to find a spot in my house where I could get consistent results like this. 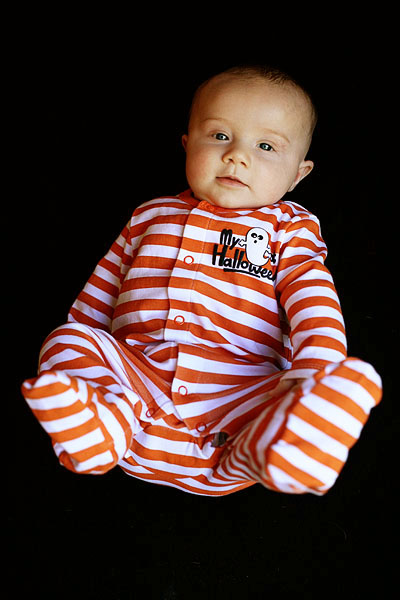 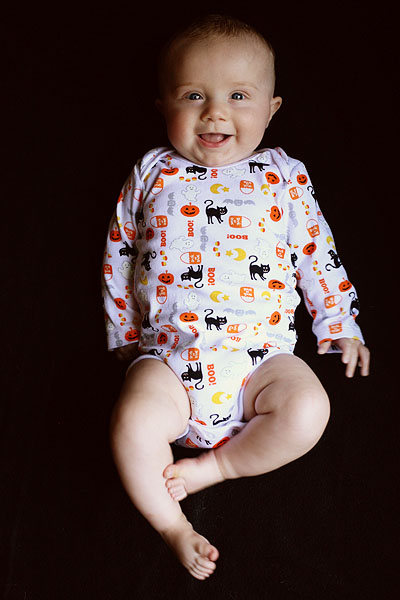 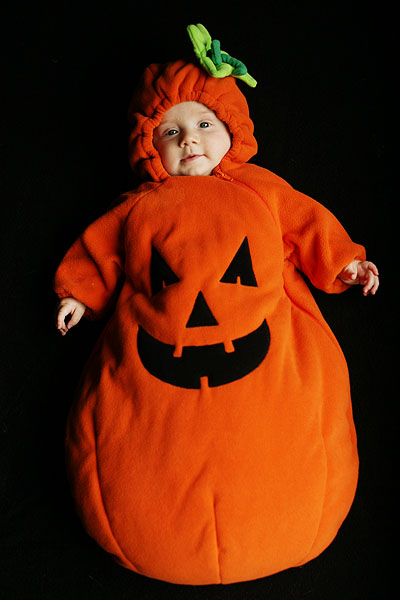 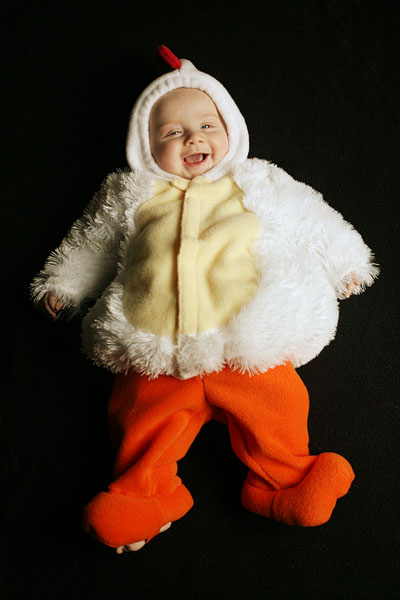 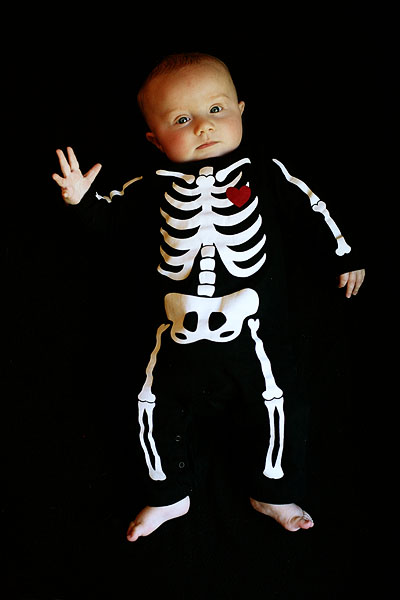 Babies look all sweet and ga-ga goo-goo soft black and white photo-y. But don't be fooled. This one is all chugging prune juice and squash and sweet potatoes in the name of trying to poop after 8 days. LOL. 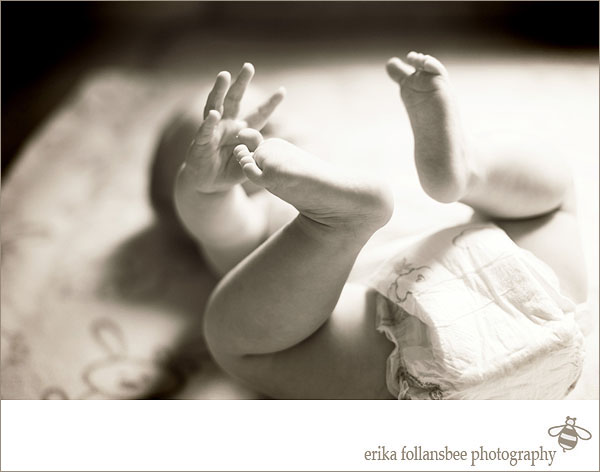 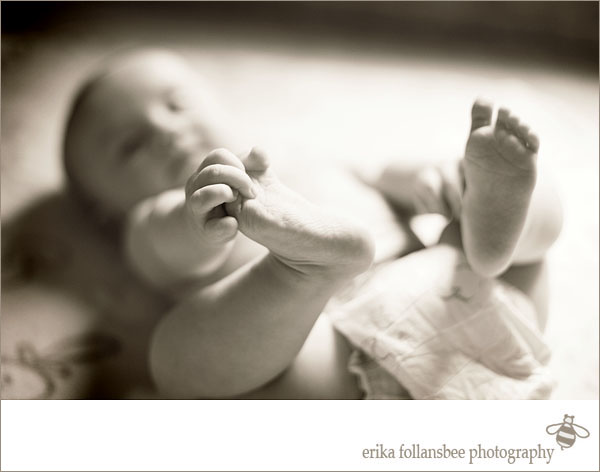 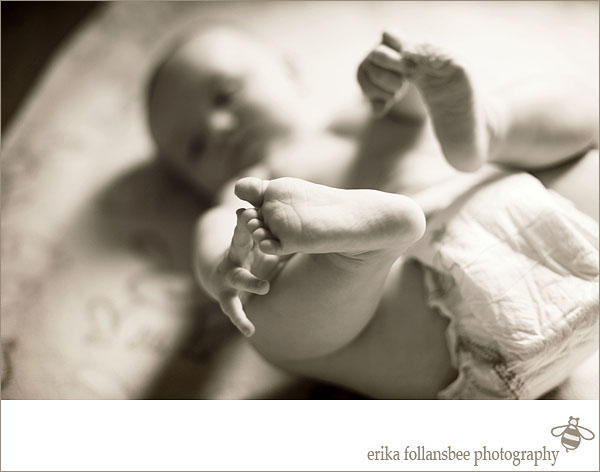 Friday afternoon we thought it was a great day to do our apple picking, so we went to Mack's Apples in Londonderry.  It's a very quick process and doesn't take long to fill your peck bag, especially with an excited two year old who wants to put everything he finds in the bag.  We had to explain that we only wanted apples from the tree in the bag, not off the ground.  Poor Drew fell down about a dozen times, tripping on the apples on the ground, but he didn't care.  That day they had the McIntosh and the Jonamacs open and I think we ended up with a little of both so I'm going to probably do some homemade applesauce and an apple crisp. 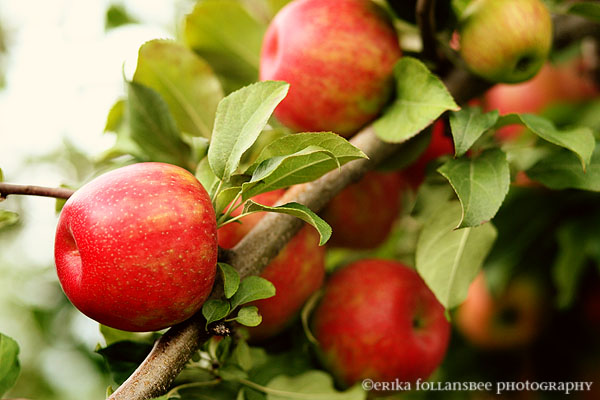 I love the pictures, even though Drew was constantly in motion and would hardly ever look at the camera. Dave was nice enough to get some with me in them too.  And do I know how to coordinate outfits or what!?? LOL. What I won't do for a photo op.... 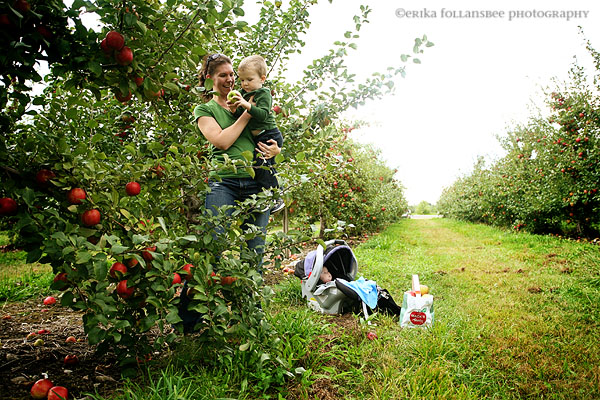 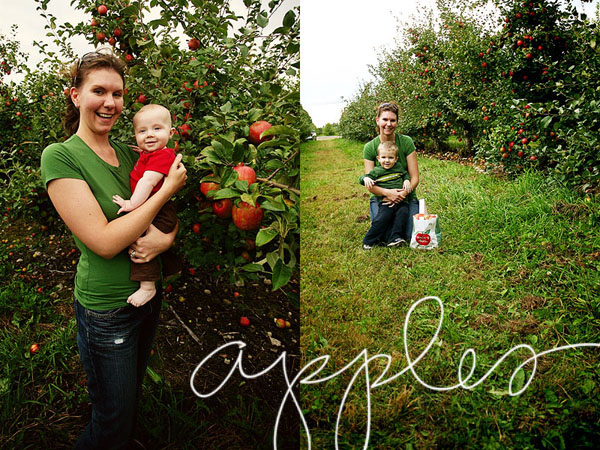 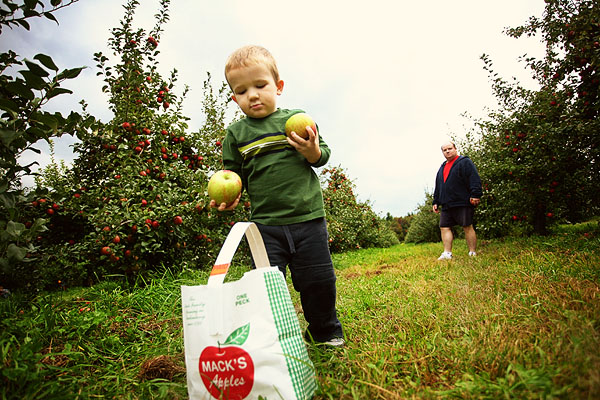 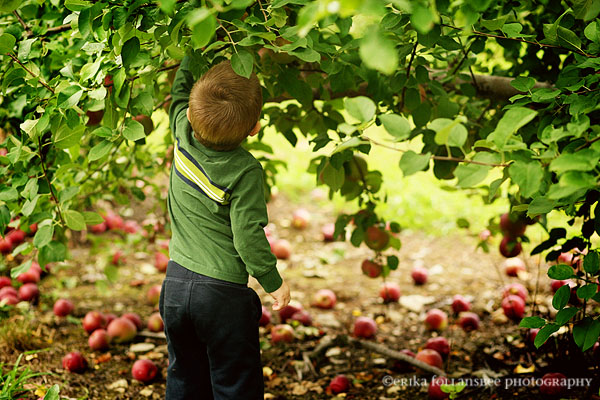 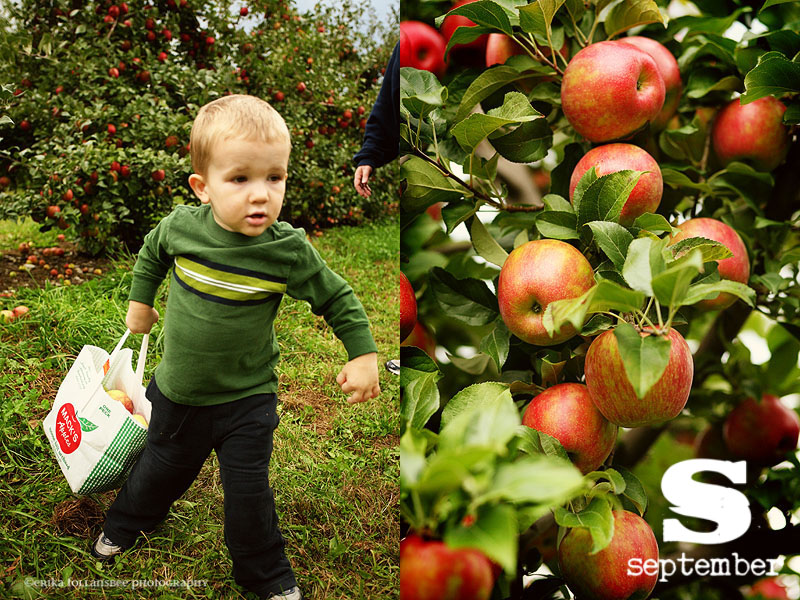 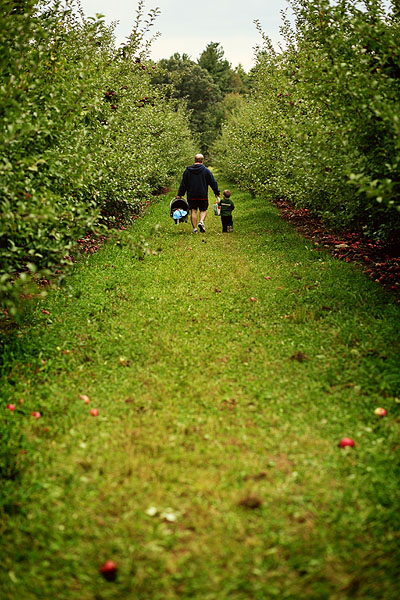 They still look cool even when they're smeared with sidewalk chalk.  I was going to buy Drew some corduroy pants but then I thought I would check his bag of 3T clothing from Ben before I did that.... and sure enough there are two pairs in there!  They fit perfectly and are so cute on him. They even do the requisite zipzipzip when he walks which I love. 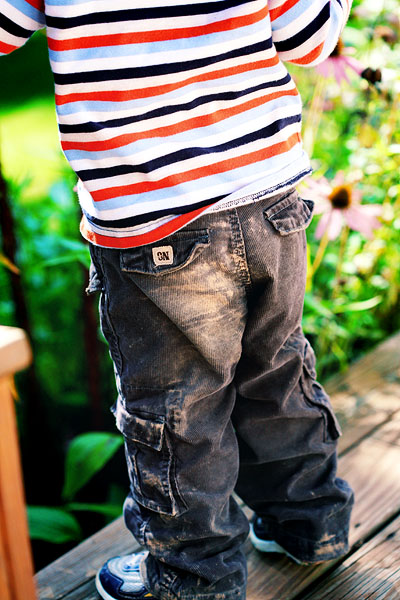 Drew had his hearing test with the audiologist today. It's been a long 8 weeks waiting for this appointment to come around!  As specialists go apparently ENT is a pretty quick one to get in with.  The good news is that there is no issue with his hearing. Nothing that would hinder normal speech development.

In the meantime he continues to DAZZLE us with his sign language and the things that he comes up with. It's just fascinating to watch him learn.  I think he's doubled the number of signs that he knows since I last posted it. Tomorrow marks his 8th week of speech therapy and we have I think 10 new signs to tell Annie about. AND he's starting to say "Dada" which Dave is so happy about!

I've been working on his Halloween knowledge and he recognizes jack-o-lanterns when he sees them now. I show them to him in the stores, and I draw pictures of them, point them out in picture books, and I have a door mat outside with a jack-o-lantern face on it. He saw it and tried to say that word! What a mouthful. But somehow he's getting pieces of that word and working on pronouncing it, too cute.

New Pictures of the Wee One 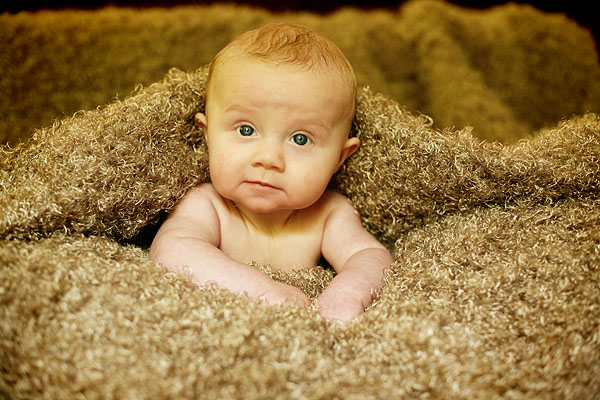 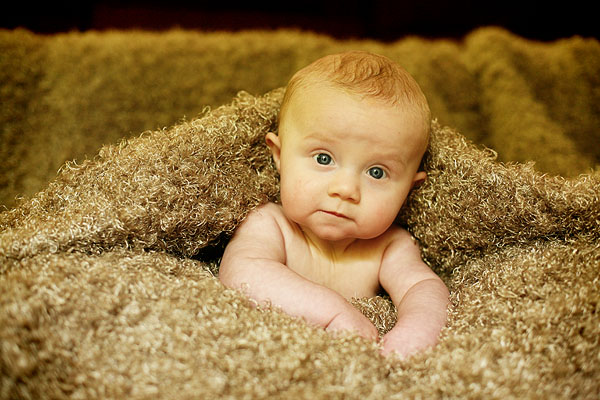 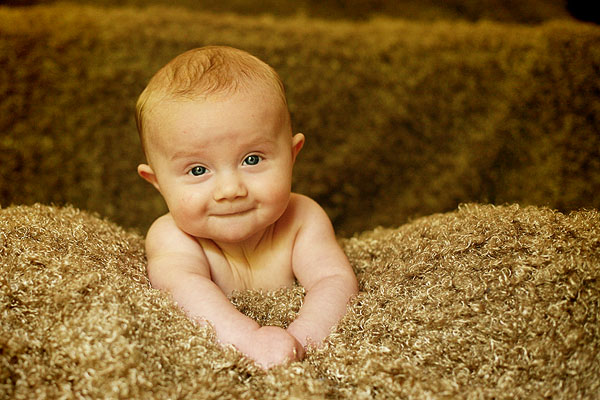 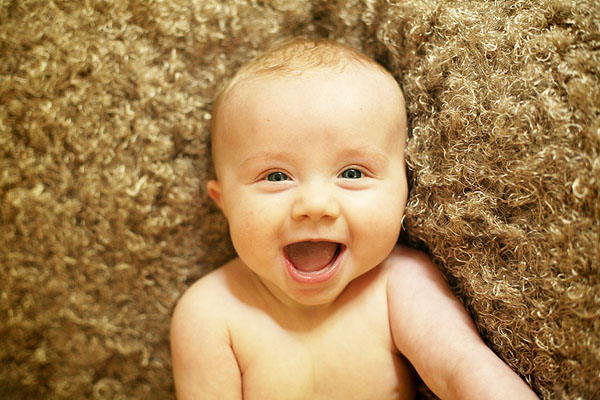 Here's to babies who fall asleep on their own in their crib underneath their mobiles, and love to eat rice cereal, and sing in the stroller on their walks, and chew on their fists like crazy, and smile anytime they see Mom.

Drew shows off his signing

We're so proud of Drew and how many signs he's learned. Here's Dave quizzing him on all the signs that he knows. He's been in speech therapy for 6 weeks now and has made great progress.  The signs have been so valuable in giving Drew a way to communicate with us.

Happy [first] Anniversary to my brother Derek and his wife Jill!  I can't believe it's been a whole year since their wedding.  They are such a cute, loving couple and I wish them many more years of wedded bliss! 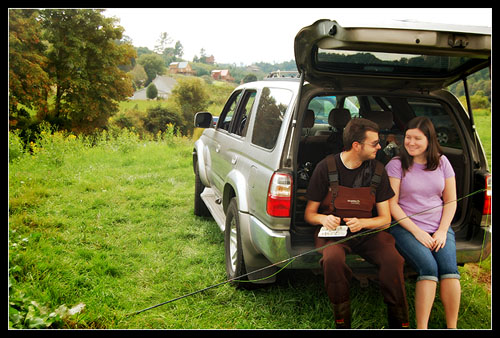 This sweet photo was taken by their friend and neighbor Aura Curtis who I had the pleasure of meeting (and photographing!) at their wedding last year. Taken Sept 5, fishing on the New River.

Dave took Drew to the park on Saturday morning, and as they walked around the trails whenever they'd see a dog, Drew would say "woof woof" in recognition. (The kid can't talk but he can do some mean animal sounds! You should hear his cat meow..... )

So anyway, they were walking along and there was a woof woof here and a woof woof there, and then a Great Dane started coming towards them. Drew decided what it was, and then said "neeiiiiiggghhhhh". A horse?  I think that's pretty smart!

Parker's first spin in the Exersaucer

Parents of young babies have a strange vocabulary and speak in tongues about exersaucers, bumbos, boppies, snugglies, Bjorns, jumperoos, and so on and on and on.....  Today's post is about the Exersaucer. It's rated for babies 4 months and up so Parker is ready to get started! He has good head control and since the doctor has ordered us to get him OFF HIS BACK as much as possible, this is likely to be his new home as much as he can stand it.

I put him in it, and stuffed blankets around him to help prop him up, and waited to see what he would do, with memories of his brother 2 years ago just kind of sitting there with his head flopping over wondering what the heck was going on. Not Parker! These two boys are so different.  Parker had barely been in it two seconds and he was reachng and grabbing for the toys and before I knew it had flipped the page on the book!  He was checking out all the toys and managed to stay in it a whole 10 minutes before he just couldn't hold himself up anymore. He's still new at this, poor guy. With a little practice he'll be hanging out for longer stretches. 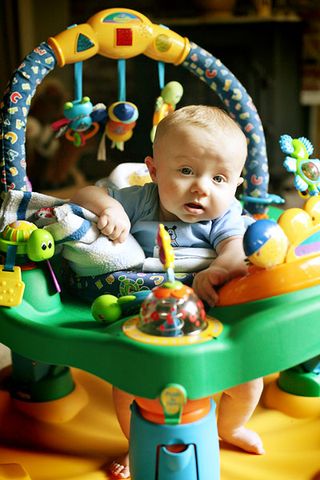 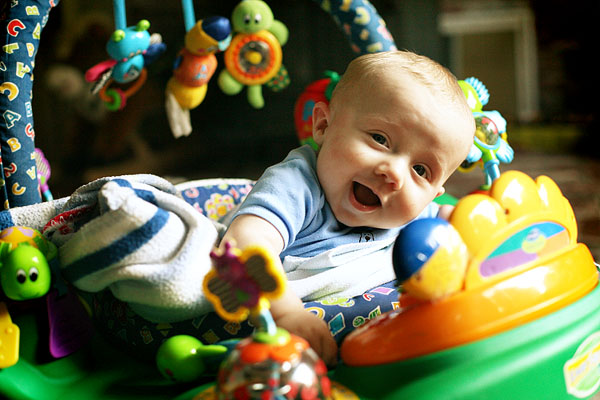 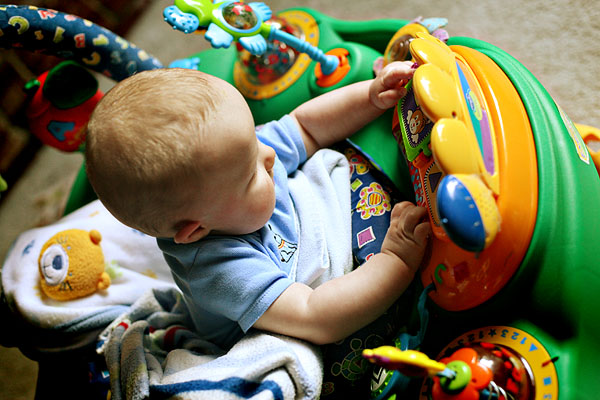