I lost one of the shoulder straps to the highchair we've been using for Drew. He hasn't used straps in a long time, and I distinctly remember when I took them off and washed them, and put them away. One of them went into a cabinet where I could find it immediately and the other one for some reason which I can't remember now got separated and I remember telling myself to go put it with the other one immediately. Of course I never did that and now it's lost. And therefore we can't use that high chair with Parker because he'll fall over.

So we had to break down and buy a highchair for him which is completely NOT what we wanted to do. Did not want to spend the money on it, and definitely did not want an additional piece of large baby gear to step around in our small house. I did go to the Graco website and try to get a replacement strap for that model # but it was pretty old even when we got it and they don't stock them anymore. GRRRR!

Once the bitterness had subsided I knew I had to get the new Graco pattern with the owls on it! Thanks to Sara for first pointing this out to me. I never imagined that I would need to acquire any of that stuff, but turns out we did. A sale at Target.com + free shipping sealed the deal. It's awfully cute and I will admit that now feeding Parker in a high chair is much easier since he's sitting upright. We've been feeding him in his bouncy seat and the poor kid was not only laying almost flat on his back, but practically sagging down to the counter top since he's much heavier now than he used to be.

Look at the big boy (who also got his first tooth today!)!  I think he really likes it.  I wonder how long it will be until sweet potatoes and prunes are smeared all over it? 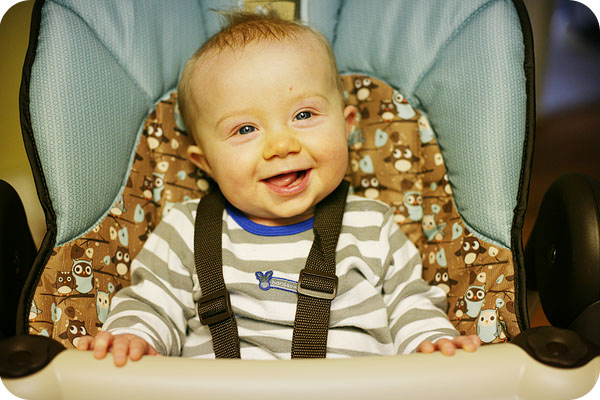 Posted at 09:16 PM in Adventures in Baby Food, Parker | Permalink

I am crazy about that pattern! Almost as cute as Parker and Drew!!!

sorry you had to buy one...I knew he was teething!

I saw that pattern the other day at Target...love it! I told Jon it was almost worth having another one for. He was not amused.

yay! I freakin' LOVE that pattern! Everytime I see something "owl" related I think of you guys.