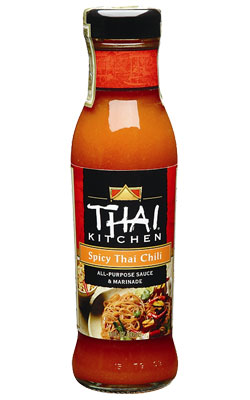 So for Christmas I wanted to make those wonderful weenies in the crockpot and I used a simple recipe of chili sauce and grape jelly. However I am a moron and did not know (and still do not know) what the hell CHILI SAUCE is. As if I don't already have a hard enough time finding anything "unusual" in our grocery stores around here, they sure as hell do not have anything like "chili sauce."  I went all up and down the barbecue sauce aisles, looking at every kind of freaking bbq sauce and marinade in the world and nothing even remotely similar showed up. I then went to the international foods aisle and finally found in the Thai section a bottle of "Thai Chili Sauce." So I thought that must be it, although I had a sense of dread about it. I was right, it was the wrong thing.  They were not good.

Apparently more Google searching with regards to WHAT exactly "chili sauce" is supposed to be, has revealed that it's from the Mexican section, in a can...... more tomato based. I seem to remember looking in that aisle and not seeing anything like that. I don't know really how to find it. And none of the recipes will give ANY specific info about what it IS, i.e. brand, size, what it's made of, where to get it.....

My brother has given me a better recipe that I intend to use next time. Nothing weird about it, just plain good!!  Also I keep stalking Facebook to see when Kathy Arsenault is going to join so I can accost her and find her weenies recipe. :) Does anybody have it? Back when Con-Glom-O allowed us to have pot luck parties, and allowed us the use of an electrical socket (which they later forbade)  she would cook up those weenies until the whole place smelled like you wanted to slap your grannie.

Oh, that reminds me...... (here I go on a Con-Glom-O tangent)......  back when I was pregnant with Drew I got a new TL who I never knew very much because she was new, but I remember for her "meet and greet" she took everybody outside individually and walked around the building in June in 90 degree weather and I was like 9 months pregnant and reeeeaaaaallllllly not wanting to do that.  I remember she was from the Midwest somewhere and a few times when we had team lunches where everybody would bring something, her "thing" was deviled eggs. She brought them every single time and was so excited to do so, it was like her big specialty.  And I love me some deviled eggs. So I would get one, and thought they looked pretty plain and all.... and took a bite and immediately knew I would have trouble finishing that dang egg. It was horrid. I can tell you right now what was in her recipe: the egg yolk, mayo, and SALT. And that was ALL. It was nasty. I felt so bad because she was awfully proud of those things but they were just gross.  And now I feel even worse because I can't even think of her name, but I sure do remember her as the deviled egg girl.

oh my, the deviled eggs. I am alergic to eggs but I do remember people tossing those things. Back in the day when I could eat eggs, I love them with a bit of mayo, mustard and horseradish (someone in my family does that, but NO SALT). I think the poor girls name was Becky??? Anyway, the funny part is she only made the eggs because she had a fantastic deviled egg dish!! Hahaha. Bet you missed that part.

At Hanafords they had a recipe for those meatballs with baskets of grape jelly and chili sauce with the recipe. My aunt made those meatballs for Christmas eve and I just adored them!

I knew Sara was the weinie expert!

﻿Thanks, Sara!! I should have asked you in the first place! If I can find the right stuff I may have to do a New Year's Eve re-do. I'm going to a different grocery store today so I'll look for the Heinz there, maybe they have it.
Yeah, it was NOT good with the Thai sauce, but everybody was too nice to say so. And Dave had a bad cold so he couldn't taste it anyway. :)

oh, and use the lil smokies weinies, too! =)

From the cocktail weinie expert: Heinz makes Chili sauce, near the ketchup. I can imagine it wasn't good with the Thai chili sauce- woo- that stuff's got a kick!