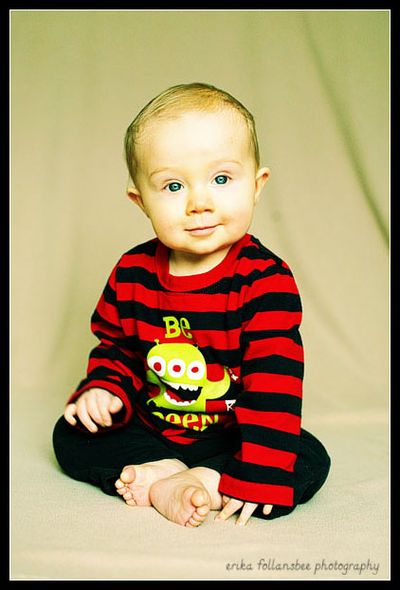 The little man is army-crawling now! Big changes have arrived in the past month. What first started as rolling, turned into big exaggerated swimming motions, then finally into army crawling by dragging himself along on his elbows.

He's drinking from a sippy cup now. We've been letting him practice on a cup filled with water and he really works at it. But his absolute favorite thing is to sneak up on a sippy cup of orange juice that Drew leaves laying around and just go to town on it. He goes nuts. He'll roll, lunge, and fling himself towards the cup, and then lay there and devour whatever is left.

We started the banana puffies this month also. He loves them. He'll start panting and flapping his arms when he sees that yellow can come out. He does really great with them. He can pick them up off the floor into his fist, but can't put it in his mouth by himself. However if he gets one stuck on his lip, he can push it back in.

He's been so awfully whiney this month also. He's had a cold for a couple of weeks now so we're not sure if he's just sick of being sick, or if he's teething, or a growth spurt, or what the heck. He doesn't want to be alone, won't play alone, needs to be entertained and held all the time. I hope it's just a phase.  Dave had a theory that he's just cold. I scoffed at that one, but tonight we made a fire and for the first time in weeks Parker played happily in the living room (even by himself!), so maybe there was some truth to that. We had our happy baby back for the evening, we almost didn't recognize him.

He's a full card-carrying member of the baby food club now. He gets a jar for breakfast, 2 containers for lunch, and two containers for supper, with nursing in between meals. And now, puffies when needed also. It can only go up from here! We'll continue to add in whatever he can chew in the meantime.

My hair that all fell out is growing back, it's all about 1.5 inches long all around my hairline. It's pretty funny.

That's so funny about the oj!