I saw this recipe on the Johnsonville Sausage website back during Christmas and I thought it sounded like the weirdest thing ever and that I had to try it just to satisfy my curiosity. I have never been a fan of savory and sweet mixed together. Like Hawaiian pizza? No way. Don't want my pineapple mixed up with my ham. And even sausage and syrup together? Yuck. I don't even like maple-flavored sausage. If sausage was a religion I'd be the Grand Poobah, and smite those who would mess up perfectly good sausage.

So anyway to think that *I* would be intrigued by a recipe that mixes up cinnamon rolls, apple pie filling and maple flavored sausage surprised even me. If I was to learn to like sweet and savory (and even compromise the integrity of sausage) then I was hoping this would be the recipe to do it. 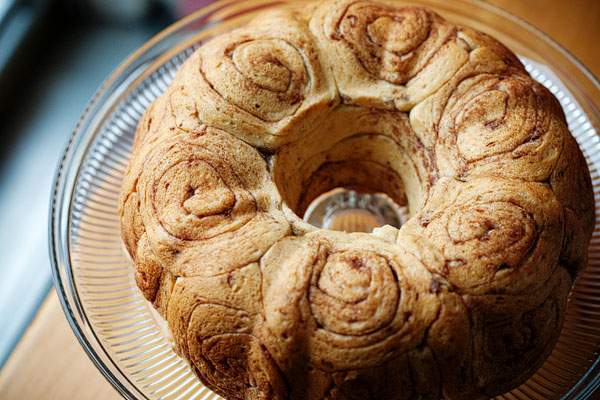 And as it turned out, it wasn't. Oh well. It was really dang pretty, but that was really the best part of it. Turns out I know myself too well.

It does sound kind of weird, and looks delicious. I'm a Hawaiian pizza fan so you may not be surprised to know that I've eaten a maple bacon breakfast. At first I thought "eww" but it's actually nice. Pancakes with maple syrup and bacon. Very strange, but morish!

The apple bit is throwing me off. Otherwise, I think it sounds good!