Drew is less than three months away from his third birthday, and I am loving this age that he's at now. It is SO cute. We can communicate better with each other now, he's understanding more about what goes on, and his imaginative play is really taking off and I'm loving to see the kinds of things he comes up with.He's always playing with his trains and creating all these tracks and tunnels for them to go on. 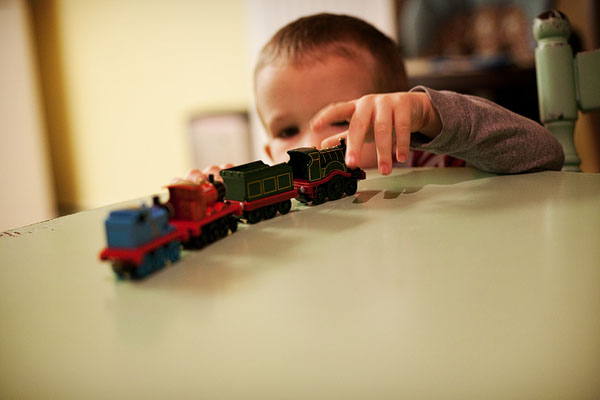 His speech therapy is still going well and he has over 350 words in his vocabulary. He keeps adding new 2-word and sometimes 3-word phrases and will repeat just about anything that we ask him to say. He can talk about all kinds of things and some that he says regularly now are "all done" "Moby runs" "down stairs" "kick ball" "Hi Moby!", and "try again", just as an example.

We have an upcoming series of meetings, evaluations, and testing to start getting him ready for preschool this summer, after his birthday. As part of his ongoing speech therapy, he'll be attending the special ed program in the Goffstown school. We'll have to sadly say goodbye to Annie, his speech therapist for the past year, as he heads into the 3-year old program and we as parents won't be as involved in his therapy since he'll be getting it in his new classroom. But it sounds like SO MUCH FUN for him and I know once he gets used to it, he's going to love that kind of environment and will really benefit from socializing with other kids and teachers.  They use a combination of verbal, sign language, and pictures to develop his communication.

He is finally sleeping in his crib like a semi-normal kid!  We got him a soft and warm blanket about a month before Christmas, and while he liked it immediately, he just slept on top of it for a while. And then we got him a little pillow and he started using that right away. And finally, now he loves to be tucked in, with his head on his pillow, and mostly stays under the blanket. In fact he is always talking about his "soft blankets" and "two blankets" (because he liked the one so much that we got him two).  But he's still in the crib with all four sides. He's never tried to climb out and I think still doesn't realize that he could get out if he tried. We have his toddler rail ready and waiting for when he does figure it out.

He can count to 20 and loves to count everything he sees. And he's still spelling everything, and reading letters. He's becoming more descriptive about things he observes, like "black cow" and "fast car."  He loves when Dave makes waffles for breakfast. All we have to do is say "waffles!" and he runs to the pantry and gets out the Bisquick and vegetable oil, and puts it on the counter. Then runs to get his step stool so he can pull it up to the counter and help measure out the mix. Coloring with markers is a big favorite right now, too. He likes to scribble wildly, and is also starting to color inside the pictures in his coloring book. When he races his hot wheels down the track he places the car at the top and goes "1-2-3-4-5-6-7-8-9-10 GO!!!" and sends it down, and then yells "WOOHOO!!"

He likes to watch different things on TV now, other than Super Why. He asks for Curious George by name all the time (it sounds like Hey George!), and in the afternoon can some days sit mesmerized by Caillou and Thomas and Friends. His nap is only a sometimes thing these days. He will take his nap maybe 50% of the time.  Every day I put him in his bed according to routine and give him the opportunity to sleep, but he just isn't interested a lot of the time. It's way frustrating for me, because that's my one chance for a rest during the day, and when he doesn't sleep it's a loooong day for me. 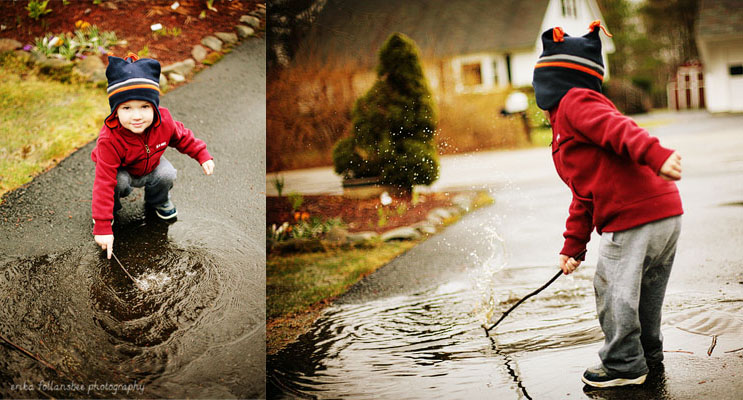 He's been one happy kid since winter ended and now we can go outside more. He loves to freaking RUN and RUN and RUN and kick the ball around. He's amazing with that soccer ball, he can dribble all around the yard, kick it really far, and even kick it backwards with his heel like daddy does. He is also obsessed with puddles and bodies of water that he can chuck rocks and sticks into. He could do that all day long if we let him. 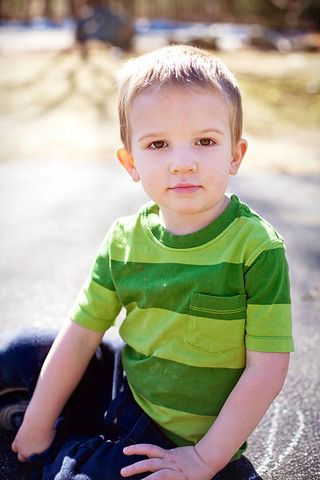 Posted at 09:12 AM in Drew, milestones, Monthly Update | Permalink

Can't wait to see him and P!