I had a great time today doing something I rarely get to do.....  hit the road and spent ALL DAY sitting on my butt! Learning about plants! My mother-in-law and I went to the Proven Winners Outdoor Living Extravaganza seminar in Norwood, MA. (And yes, we saw the Rt. 1 "Automile" shrine to Ernie Boch. Good LORD. The town that Boch built.)

It was a day filled with minor celebrities of the gardening world pantheon, none of which I had really ever heard of except for Kerry Meyers because I get her email newsletter already. :) The "headliner" of the day was apparently P. Allen Smith who I don't know who he is but I'm thinking he has a TV show of some kind and has written a library of books. He was cool and had a great presentation. Of course the whole day really makes me want to dig up my entire yard and start over, but I did get some good ideas.

"Restraint" is the order of the day.

The seminar was held at the Sheraton hotel and it was really nice. Our lunch was outstanding, a 3 course meal finished with cheesecake. We met some people sitting at our table, and at the end of the meal the woman who had been talking to my mother-in-law goes, "my son is the lead singer and guitarist of Vertical Horizon." I was intrigued by this for a while, and in fact spent the next HOUR trying to think of their hit song and what it might be...... finally it hit me. OH YEAH! I totally know that song. So that was my third or fourth degree of separation with fame today. 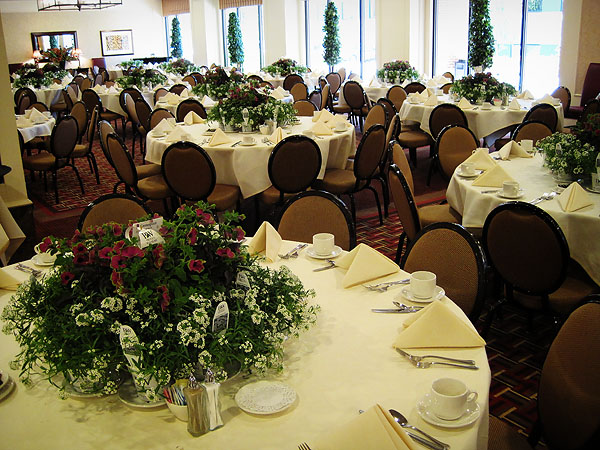 Also, I won a door prize!  They gave away lots of stuff to the audience by drawing names out of a bag, and no sooner had I whispered to my MIL that "my grandma always won something in these things...." then they called my name. Maybe her good luck transferred over to me!  I won a couple of weeding tools that seem pretty cool.

So it was a totally fun day, leaving the house at 7am and returning at 4:30. But the fantasy didn't last long.... back home to find a sick Drew puking all over the place. Ugh. I just hope Parker doesn't get it. I already had it on Wednesday, laid up in bed and sick to my stomach. We'd been thinking the kids had escaped it.

Sounds like it was a great time, but not for Drew...

I would of asked the mother of the Vertical Horizon guy why they never made another CD or if they did it wasn't as good as the first, lol cause I never heard a song from it.

That's a cool thing to do! I even know the P. Allen Smith dude...seen him on HGTV and in magazines...some garden guru...the tables at the luncheon are so pretty...oh, and I Love Vertical Horizon! Too bad the pretty day had to end with a sick little boy!