Drew is so cute

Drew has been so cute lately. He keeps saying things that I'm always thinking "you better write that down before you forget."  He still doesn't do much more than a few words in a short sentence, but we're starting to be able to understand some of his phrases and it's so awesome to know what he's thinking about.

The other day he was playing with his water toys in his water table, and he was holding each one up and going "Hippo! Letter H!  Octopus! Letter O! Fish! Letter F!"  So that was awesome to see that he was identifying the animal and also thinking about the word and what letter it started with.

This morning I was getting his clothes on, and he looked at his clock and goes "75!  No, 22!"  which was a direct quote from a Curious George episode. So funny. He knows those episodes backwards and forwards. Like when he walks around with his favorite stuffed dog and goes, "Hundley, no dogs allowed!"

This is one of the things they fight over. The Bus. Parker wants it because he just loves it. Loves to ride it. And Drew wants it just because Parker wants it, I think. Drew doesn't like to ride much of anything, although he'll get on this and scoot around for a few seconds, until he plows into the mulch. 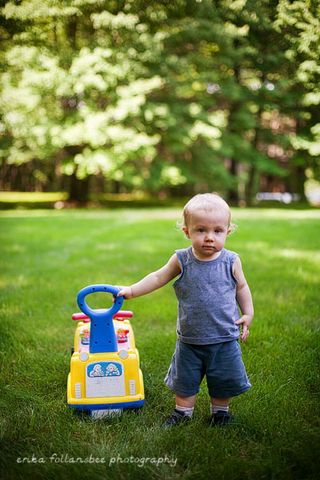