What a big month for the little man! He is just so cute and his personality just keeps coming out as he gets older.  What strikes me the most is how friendly he is. As soon as he sees anybody, one little hand goes up in the air in a wave and he says "Hi Da!"  Everybody is called dad apparently. We go shopping, and everybody we pass gets a big wave and "HI DA!"  We go walking around the neighborhood, and if we see a random person, he's all craning his neck and waving at them. SO funny.  And it's so foreign to me. I always think to myself, "oh I have one of those kids....."  I have seen this type before. But never imagined I'd have one!  So I have one child who goes nuts waving at strangers, and my other child at that age would have burst into tears if anybody so much as looked at him...... sheesh!!!

His biggest accomplishment is obviously that he's walking now. It was at about 12 months and 3 weeks. So cute. One day he just started crab-crawling on feet and hands and it was like he was done with the knees. From here on out, feet only (and hands optional!) He accepted no more nursing like it didn't even bother him. I think he was as done with it as I was. Now he drinks milk happily, and we have three different kinds of milk in the fridge at all times. Whole for Parker, 2% for Drew, and skim for me and Dave. It's ridiculous. But now at bedtime we read Goodnight Moon, and he's starting to get the idea of looking at books and turning pages. Shamefully I haven't read to him nearly as much as I did Drew at his age. But he gets lots more interaction in other ways that Drew didn't get so I guess it all works out.  Here he is pointing to the red balloon. 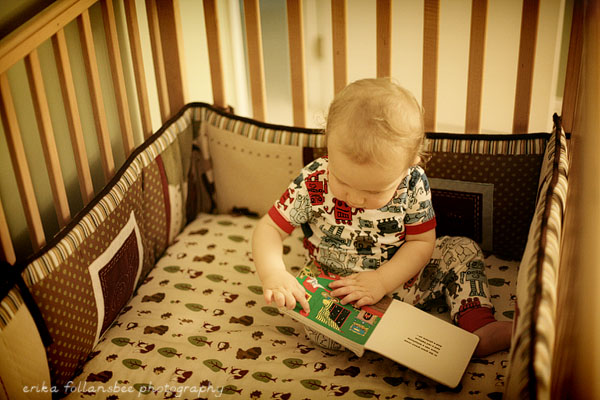 Too bad he's still trying to kill himself at every opportunity. In addition to the new walking, as if that isn't dangerous enough, he's also climbing. Onto anything that will hold still. In about 2 seconds he can be up into any chair, on any box, stand on any bench, hang onto any window ledge.....  I am constantly running.  I leave the room for 3 minutes and I come back and he's standing up on a wobbly bench, reaching up with arms outstretched to swing on the blinds. Great. If he makes it to see his 2nd birthday I will be shocked. Right now we have every chair in the house turned onto its side so he can't get up on it. Even his stoller is on its side in the floor because he will just climb right up in it.

His speech seems to be on track as far as we can tell. He seems to be making all the "normal" sounds and babbling. After Drew's speech issues we're a little more sensitive to these things, but Parker is already making more sounds and words than Drew ever did until MUCH later so we think he might be developing normally.  He can say dad, hi, fish, banana "nana", Mom.  We shall see. We are prepared! We know sign language!

He eats pretty much everything. We love this kid. He loves bananas, watermelon, grapes, waffles, sausage, crackers, goldfish, hummus and pita, hot dogs, bread, pastas, cheese, etcetera, etcetera, etcetera. There have been very few things that he refused.  He was absolutely done with baby food after he hit about 12 months. He would have no more of it. We tried to get him to eat some more of it, since it is a great source of veggies and stuff, but he saw us coming with it and started throwing arms and turning away from it. LOL.

He still sleeps great at night, but is really starting to hate his two naps. When I carry him into his room he starts bucking and kicking and yelling. He knows what's coming. But he's still a great napper too. I've never been able to complain about this kid's sleeping, he's been great all along. He goes to bed around 7:30 at night and wakes up around 6 or 6:30. I can't complain. He coos and plays and looks at his mobile until I can stumble in there and give him his orange juice. He loves his drinks. He can be mad as hell but if you just give him a drink all is well.

He's such an emotional kid, and we're starting to see the beginnings of temper tantrums. At this point it's still pretty funny when it's coming from a 23-lb ball of cute fury. :)

Posted at 05:29 AM in Adventures in Baby Food, Monthly Update, Parker | Permalink

I love your updates! Isn't it fun to see the differences in each child? I love that. The individual...ness. lol

And the temper? Aiden has that too! Although his might stem from being heard above the rest of the gang. lol The kids always want my attention at exactly the SAME time. They hover like birds around a cracker. It drives me crazy but I secretly love it. :)