Yesterday we decided to put the toddler rail on Drew's bed and liberate him once and for all. He's one of those kids who was late in transitioning from crib to bed, and as the books all say, as long as he's not trying to get out and hurt himself, there's no reason to rush it. But at his age and size, it did seem pretty comical and/or mean to keep him caged up, so we went for it.

He LOVED it. When Dave got the pieces switched out, Drew spent the longest time just getting in and out of his bed, in and out, in and out, and rolling around and wallowing in it. He freaking loves it. One of the first things he did was drop his favorite stuffed dog over the side, and jump out and say "I'll get it!!" He loves being able to get his own toys that he drops. 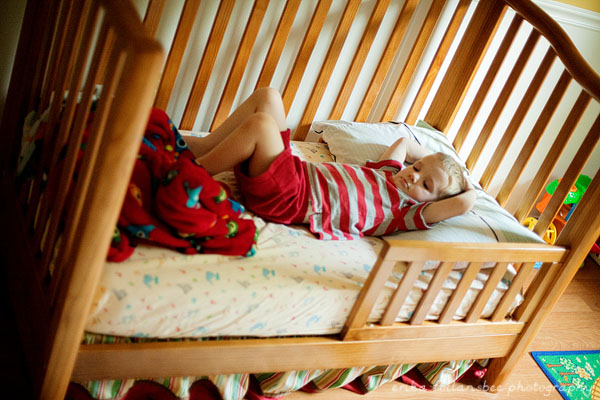 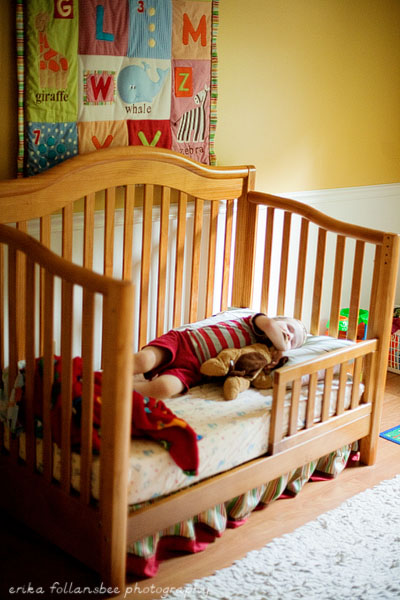 That evening after supper I took him to the park to burn off some energy so hopefully he'd be tired when he went to bed. ;)

Bedtime was interesting, we were fully prepared to be up ALL night taking him back to bed. But we weren't!  When I first left his room, we started counting how many times I'd have to go back in there before he settled down.

In rapid succession, I went back in seven times in 10 minutes. As soon as I'd leave the room, we'd hear his feet hit the floor and he'd come open his door and peek out. So seven times I went in there and (very quickly) escorted him back to his bed, and simply said "It's time to go to sleep. Stay in your bed."  So seven times I did that, the same way each time, and after the 7th time he stayed.  It was awesome!

It took him an hour to fall asleep, which is not unusual for him, but he stayed in there and didn't get up again. Good boy.

You guys did a great job! His reaction to the bed is a riot,,,such a cutie pie!

Look at that big boy!! They're so cute when they're sleeping. :)

Actually I haven't.... I wish I had, though! Would be nice to have some guidance about what to do!