So this is the story of how I lost my favorite CD and came to find it again...... 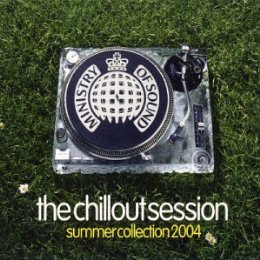 A long time ago, I bought this random 2-disc CD on eBay called the Ministry of Sound Chillout Sessions Summer Collection 2004 from somewhere in Australia. I don't even remember WHY I bought it, exactly..... that part has long since been lost to forgotten memories. But I came to love it. Specifically, Disk 2. I used to play it all the time when I was scrapbooking..... waaaaayyyyyy back in the day. It was a great chillout collection, the title didn't lie.

And it took me awhile to get into the whole iPod thing, and it wasn't until somewhere around 2008 that I started having Dave burn all my CDs to mp3 so I could listen to them digitally. I thought I had him do ALL my CDs but apparently my Disk 2 of this collection never made it into the pile to be ripped, because (duh) I still listened to it all the time and it was in the CD player. Yes, I still had a CD player and my stereo all set up in my scrapbooking room because I had HUGE speakers and it sounded SO awesome. Those days of course are long gone.  That room became Drew's room when he was born in 2007.

And then finally to make a long story short, after we were fully invested in the whole mP3 thing, we got rid of all our stereo equipment, speakers, CD players, amplifiers, everything..... it all went to Goodwill.

So it was only recently that I started looking around for ways to replace that CD. I still have Disk 1 safe and sound, which is great, but I totally lost Disk 2 which was my favorite one. The CD is no longer in production, it was made in Australia, it isn't available in digital format on itunes or amazon....... so I had to end up getting it on eBay once again, from some guy in Melbourne.  I actually made him an offer lower than what he was asking, and he accepted, so that was good. I'm still mad that I had to buy this dang thing TWICE, but it's all good now.

Sometimes I listen to it and I think it's dumb, but other times I still love it and enjoy it, so I still think that I'm better off with it, than without it. Oh well. That will teach me to check the CD player next time I get rid of another one. :) LOL. Not that there will EVER be another one!

Don't forget (even though we have never met) that you do have an Aussie friend. Next time you need something from here just let me know. I'd be happy to help you out.