I remember the day. It was back in the very early spring of this year, I think. Dave came up to me and told me there was going to be a pumpkin patch right next to our house. What?  SHUT UP!!!  I won the lottery that day!  It was only just last fall that I lamented on this blog post that I had not been able to find a "real" pumpkin patch in this area, although I knew there had to be some somewhere! Well, somebody was listening because they brought me a pumpkin patch right out my front door!  "They" being Deveriendt Farms on Mast Rd in Goffstown. We've been getting our mums and pumpkins and stuff from them for years now, so it was awesome that they're using the field next door to grow some of their crops.

We were thrilled all year as we watched the tractors coming and going (they really didn't get started until right around June 1st) and heard all the plowing and whatnot going on over there. Then suddenly, there were little plants. And things were quiet for a long time (in terms of the farm, anyway.  The loggers, now--that is a whole 'nother blog post). It was a looooooong, hot, dry summer so we wondered if they would even live. But farmers have ways around that, I guess, and one day in early July we went up there and saw this: 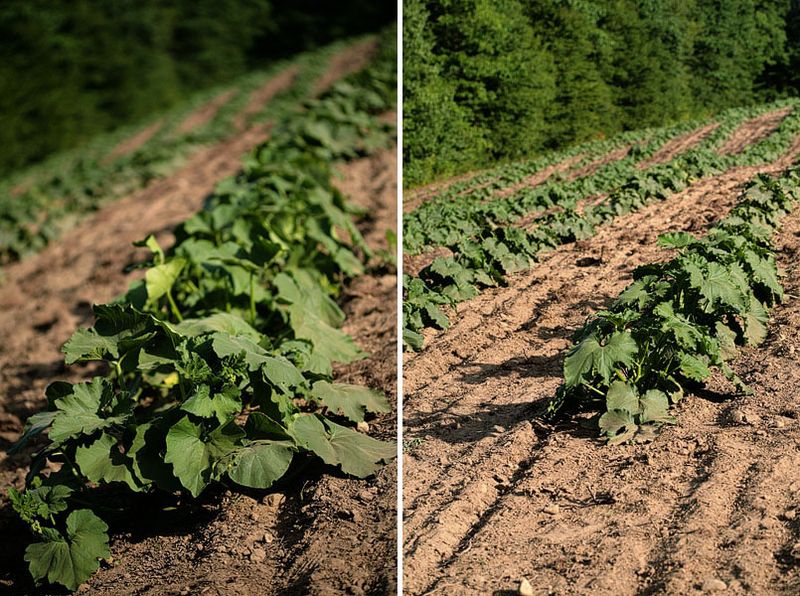 At this time, we would just tell Drew that we were going to look at the "plants." One time we made the mistake of telling him we would look at the pumpkins, and he was very confused -and disappointed- because obviously there were NO pumpkins to him. LOL. So we didn't start using pumpkin terminology until there were actually some forming on the vines so he could understand (sort of). 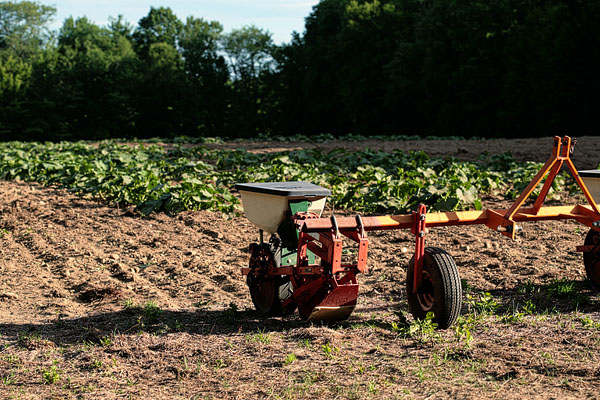 The next time I went up there to take pics was August 19th, and things had BOOMED!  I hardly recognized the place. It was beautiful! (not to mention, look at the difference in the light. This is pretty much the same time of day, but the difference in light between July and August is remarkable. About 6 weeks and maybe a couple of degrees of the Earth's axis makes for some much prettier light!) 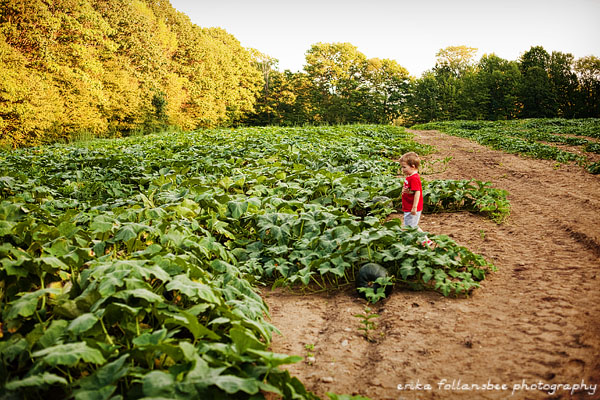 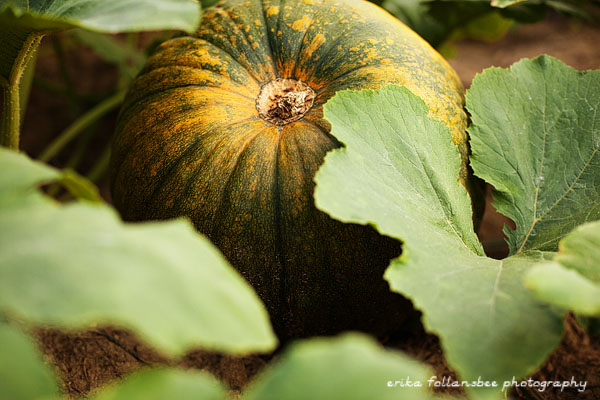 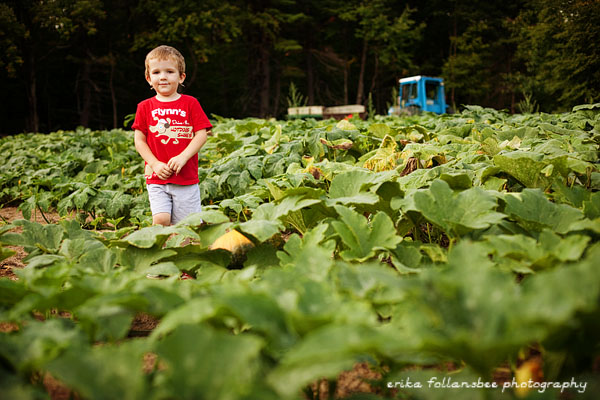 Things were coming fast and furious at this point, so it was fun to walk up there every couple of days to see the changes. The pumpkins were turning orange by the day!  Here we are on August 31st...... still with so little rain!...... 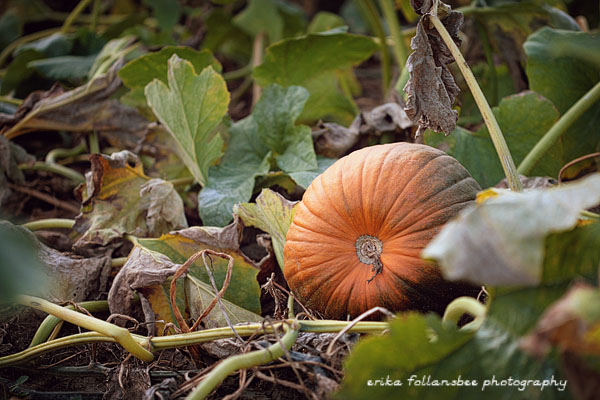 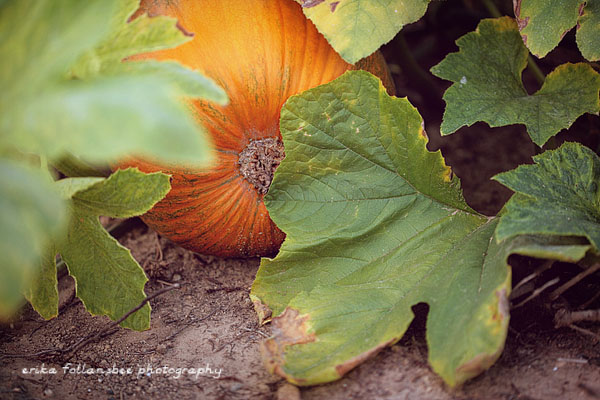 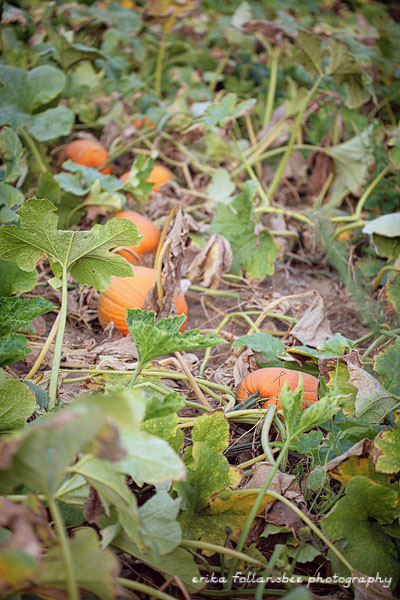 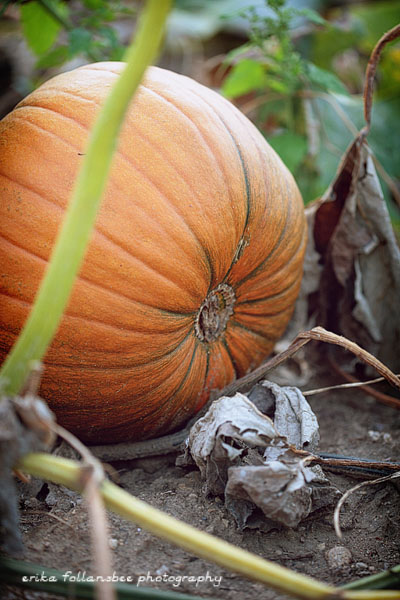 And I was so interested in the pumpkins that I paid little attention to the other crops going on there too: they also have summer squash, cucumbers, beets, and butternut squash and white squash.  The folks from the farm have been coming by every day now that we're in the heat of harvest time, many times twice a day, to pick things right from the field and take them back to the farm stand. It's amazing. You don't get any fresher than that! From field to farm stand all in the same day. Here we are at September 6th. 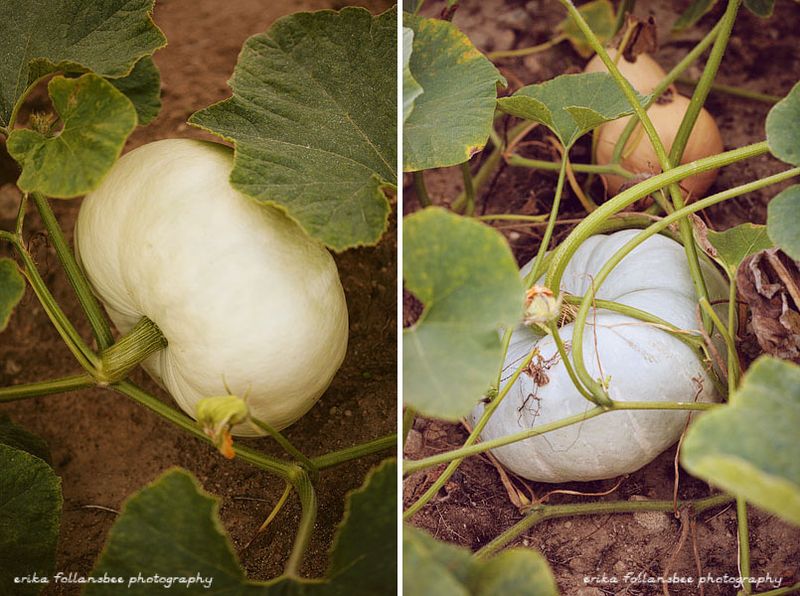 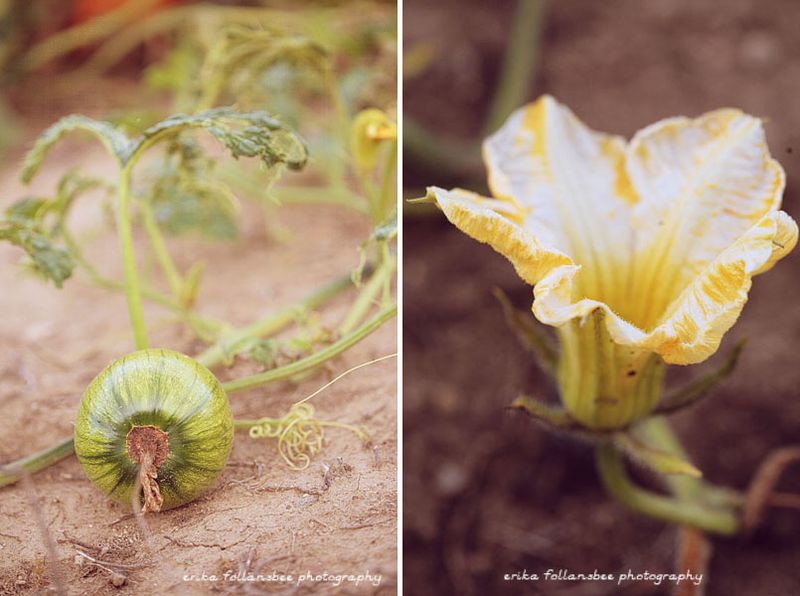 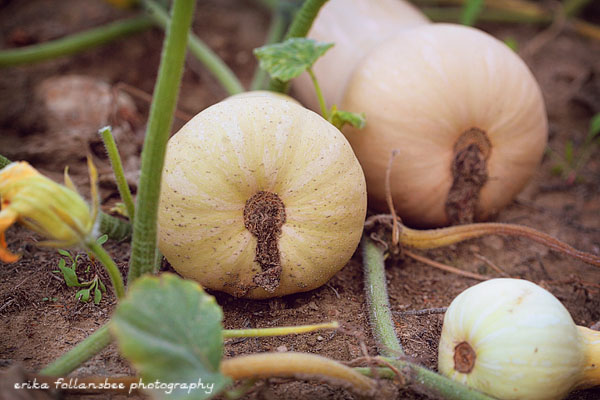 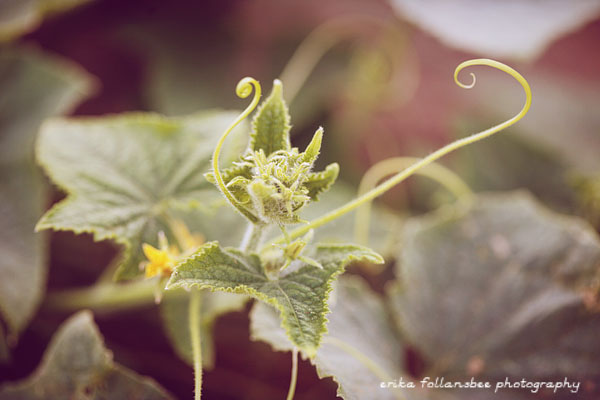 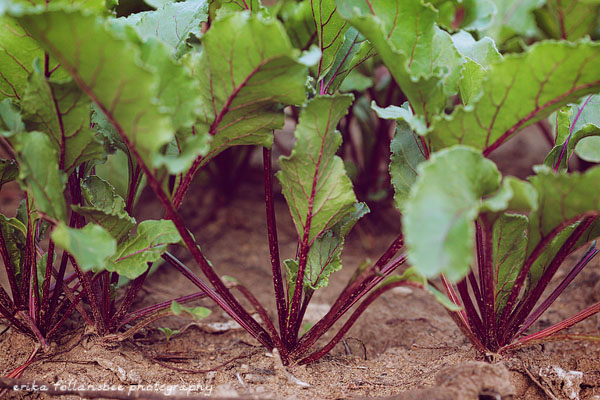 And lastly..... one of the last times I went to the field was Sept 9th. I took pictures of the whole field full of pumpkins. And I'm glad I did because just two days later they started coming to harvest the pumpkins. I saw them drive past my house with pickup trucks full. And now the fields are mostly picked over, so I'm glad I got my photos when I did! 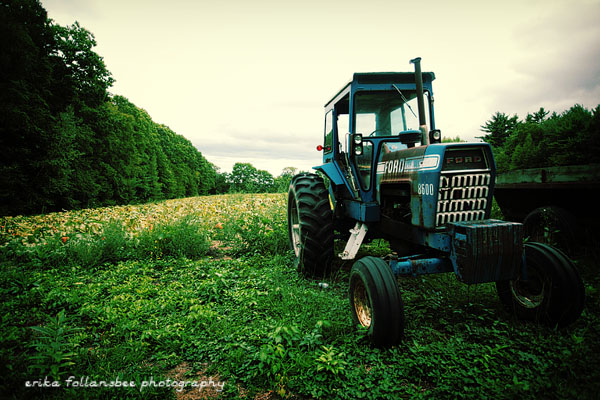 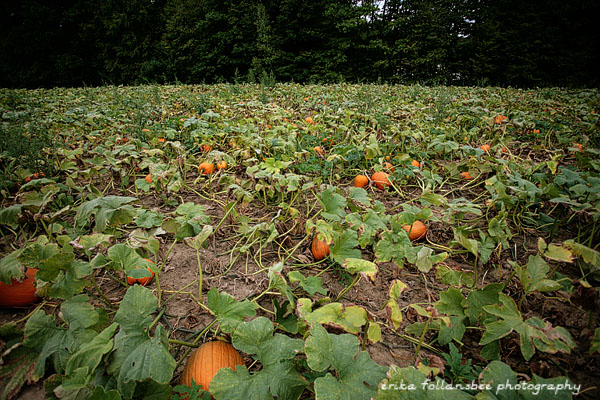 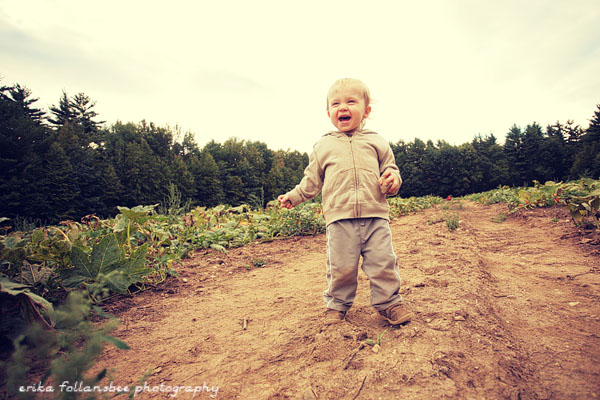 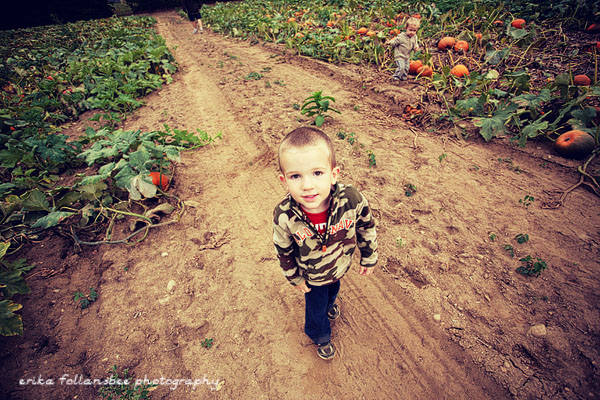 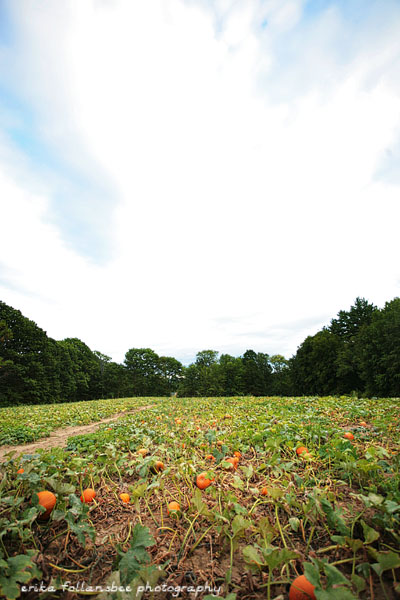 So.... what's next?  This bizarre summer has seen months on end of farming, logging (which is a whole 'nother post in itself), and now that those are over with..... now comes the ROAD PAVING. In a couple of weeks, they are digging up my entire road and rebuilding the whole thing from scratch. And GOD knows it needs it.  Including digging up our culdesac and making our front yard much bigger! It's a strange thing when they actually REMOVE pavement instead of adding more. But they are!

I was hoping I could come pick pumpkins right from that patch! That is so hard to find around here. I found one once but can't remember where the heck it was! That is my dream each year. So much more fun and better pictures walking around the pumpkin patch!

Do you get to glean? And what a great learning experience for the boys.