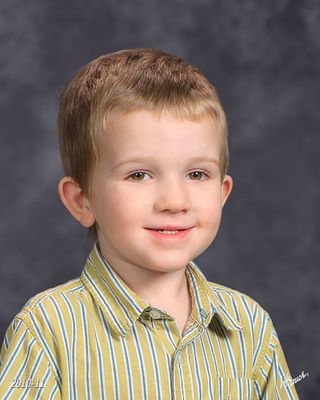 We've decided that Drew's teacher is a witch. A good witch.  A witch of white magic.

When school picture day rolled around, it was scheduled on a Tuesday which is a day of the week that Drew doesn't go to school, so he didn't get his picture made. I shrugged and thought, who cares, it's only preschool and <snicker> they'd NEVER be able to get him to sit and smile for the camera anyway, so it's just as well. I'd hate to put his teachers through the torture of fighting with him on that point. (but secretly, yeah, I was a little bummed.) Those Lifetouch portraits are SO bad and SO cheesy, but still.... there's something about a sweet school picture of your child that you cannot resist.

Later, we got an email from Drew's teacher inviting us to send Drew to school for re-take day (also on a Tuesday) so he could get his picture made if we wanted to since he had missed the real picture day. Yay! I was happy about that. I found a nice button down shirt in his wardrobe of Ben Clothes (and he willingly wore it, woohoo!) He looked so handsome.

When I picked him up that afternoon, I asked him "did you get your picture taken today?" and his eyes snapped to mine and he smiled so big and sweetly. That flash of recognition that he knew what I was asking convinced me that he did, and he had been okay with it. He can't answer questions about what he did at school that day, so to have that subtle response to my question was a great sign.

And ever since then--this is how I know his teacher is a white witch--Drew will pose and smile for a picture! This is something that he's never done EVER in his whole life (not on purpose, anyway). He has always run away from the camera, or ran right up to it. So I don't know what voodoo they did on him, but they taught him how to sit there nicely and smile for a picture. Fantastic!  This is a huge relief to me as his mother and a photographer. You may wonder why I never have many pictures of Drew on my blog? This is why. He just won't even cooperate. Never has, until now.

LOOK at the amazing smiles!  This is the smile of my baby that we all know, but never makes it to the camera (and hence the blog).

This is my sweet little boy who always asks "may I be excused?" before he leaves the table, and pushes his chair all the way in, and cleans up anything he spills, and carefully puts all his clothes in the laundry basket and tries so hard to put on his own shoes and is all "I want DO IT!" about everything. Mr. Independence. 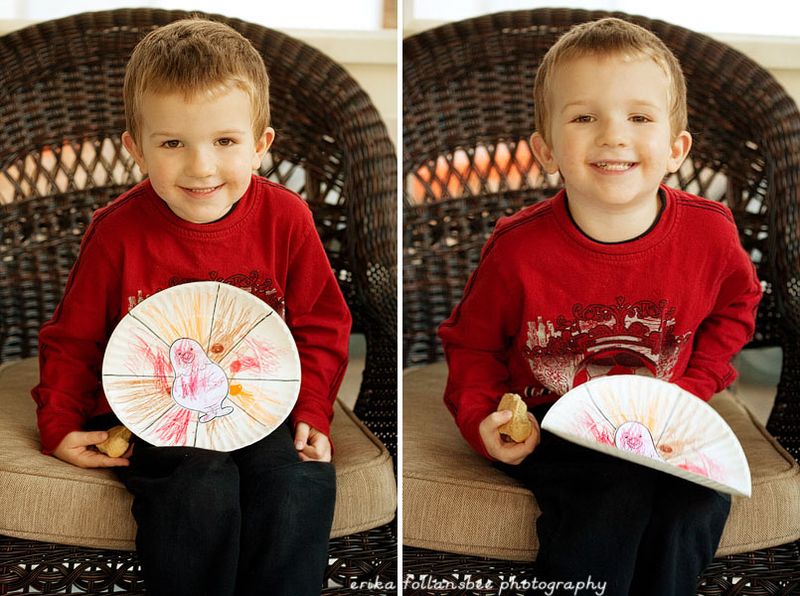 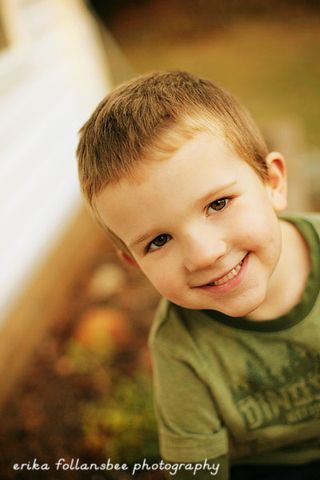 Posted at 11:52 AM in Drew, milestones, Preschool | Permalink

He is such a little sweetie-I just love him!

Look at the top pic of him next to the pic of you on the sidebar- OMG he looks just like you there!
Gorgeous pics!

Wow! You might just have to go to his school and learn some of that magic voodoo!

I can't believe how grown up he looks.

Very nice. He is such a sweet boy. He just wasn't ready before and the time was right when he was at school. Plus he may have wanted to please his teacher since he already knew he had YOUR heart.

What a doll baby! I guess you know other people can get your kids to do things that you never can.