The Elephant in the Room

Where to begin talking about this? I have a lot to say, a lot to write, to feel therapeutic about it, but I also don't want to alienate my few blog readers so I will choose my words carefully.

Drew was diagnosed with autism last week, and so the past week has been a blur of tears, and questions, and frustration, fear, and numbness and quietness. At some point we just can't think anymore, and just kind of shut down.

We started our process with the Child Development Clinic in Manchester a long time ago. It was back in November that I first made the phone call to get the ball rolling, and it was shortly before Christmas that I sent in the huge pile of paperwork to them. Questions and insurance forms and psychological instruments and permission forms and all kinds of things. They said it would take a long time to get on the waiting list, and it sure was. Finally in March we made it to the "short list" and we had a home visit by Nancy. Nancy was wonderful and the entire purpose of her visit was just to get to know Drew and play with him in a no-pressure environment. It was brilliant. She came over, talked to us a little bit, and built some towers out of blocks with Drew, and talked about Thomas the Train with him. And that was it.  Two weeks later, when it was time to go downtown for his eval, all we had to do was tell him we were going to see Nancy, and he was so excited. Normally taking him to a new and strange place would have been a big problem but the promise of seeing Nancy and playing with more toys with her was magic, and it was so easy. We were so grateful already at this point, for an easy arrival with no drama.  Clearly they know how to handle kids like him. :)

So the testing process was a breeze. Drew was seen by a developmental pediatrician, and a child psychologist and we answered questions to the doctor while the psychologist played on the floor with Drew and observed his play and interactions and gave him some tests. They didn't seem surprised by any of our answers or concerns, and I think looking back on it, knowing now what I know but didn't then, that they already knew the answer when they left the room to have a conference and discuss their findings.

Even Drew's former speech therapist, Annie, came to be with us for the evaluation. She was and is so fabulous for our family and even though she hasn't had any work with our family for nine months now, she came to support us. I can't get over how wonderful and kind she has been to us all along. Drew kept staring at her; he knew that he knew her from somewhere but couldn't figure out where. :)

Anyway, so he has autism. It is a bizarre and huge and widely varying disorder, that appears to have so many myths and stereotypes associated with it. There is a saying, "If you've met one child with autism, you've met one child with autism." Ever since Drew was very young, we always knew there was something up with him.  We weren't sure WHAT but we always hoped it was stuff that he would eventually "outgrow" or would just get over in time. I don't know that we really allowed ourselves to suspect autism because of the main point that he's always been freely affectionate, and has good eye contact. I always thought that those were the hallmarks of an autistic kid. But it's not true (for every kid).

But now that we know, so many of his other issues all suddenly make sense in this context. all the things that we've had ongoing problems with him about all fit into this puzzle.  Like his speech delay, sensory issues and sensitivity to new/different situations, noises, and places, disinterest in interacting with other kids, picky eating, constipation, and probably so many other things that we're still learning about.

A few days after the diagnosis, a police officer was driving around our neighborhood in a cruiser and stopped to talk to us since we were all outside. He thought it would be fun to flash the lights and run the siren for the boys. Drew freaked out and fell into the driveway in a fit. Parker thought it was awesome. Drew was messed up for the rest of the day.

So, BLURG. This is getting long-winded.  His prognosis is good because he's very smart and continues to learn and make progress. They think he'll be high-functioning as long as he continues to get more early interventions. He's already maxed out the preschool in Goffstown, as he's in the special ed program for as many days per week as is available. We're looking into private speech therapy with Annie's business partner who specializes in ASD so we're excited about that.  Thank God for Annie and her help in knowing what we need and where to get it. I still think there's a reason why she came to be with our family, and I'm so grateful for all the therapists in the world who help families in tough places. 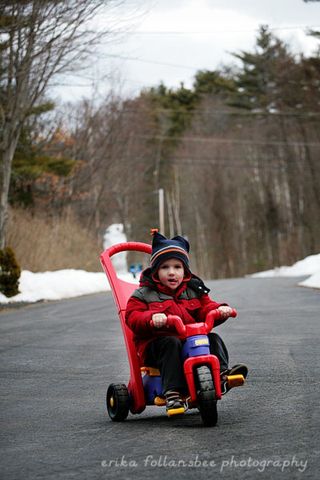 Erika, I'm sorry to hear of Drew's diagnosis. I have always thought he was a great kid-very sweet,affectionate and smart. I'm always flattered to get a hug from him. Seriously, you and Dave are amazing,dedicated parents and Drew has been fortunate to have early intervention. The support team you have will continue to guide you. I am positive a day will come where Drew will overcome this.
Hugs,Candy

Thank you all for your kind words and support--it's wonderful to not feel alone in this whole thing! We're excited and hopeful to get him started in additional therapies soon, and we're so glad and grateful that we started this whole process so early. Even without the diagnosis he's been in early interventions since 25 months and that has been the reason why he's done as well as he has.

Erika, I'm not sure what to say. I feel like I've gotten to know you a bit through your blog. Drew is so lucky to have you both as loving parent's who do everything they possibly can to get him the help he might need.

You know I am always here for you too, with whatever you need, whether it be some time for you to visit by yourself, or for some dog time for Drew! They say animals are very therapeutic so any time you (or he) would like to visit again, just let me know! My door is always open to you all! Hugs and love to everyone!!!!!

I can only imagine what you are feeling right now. I'm so glad that you all have a great support system and it sounds like Drew is going to continue to thrive with even more interventions available for him! Just remember Drew is still Drew diagnosis or not, it doesn't change who he is! I will be keeping you all in my thoughts and prayers in the coming days.
We may be headed toward an autism evaluation ourselves, the special ed preschool Eli is in has not pushed us to get it done so far, but his pediatrician thought at one point he could be at least borderline. Drew being diagnosed makes me think we should start that process, since I always read your blog posts and Drew and Eli sound so much alike.

I'm sure it's a confusing and scary time right now. It sounds like Drew's in the best possible hands. Call me if you need to be in 'good hands'. I'm a great listener and as you know I deal with children with Autism frequently. Call or write if you need anything. Love you and the family!

Hi Erica... Not sure what to say other than we are
here for you. It sounds like you have a great support
system and a great school district to help Drew succeed and
develop. xoxo

Ditto to Brooke's first sentence. I have always enjoyed your blog and family updates. I will continue to enjoy them with friendship and support from my corner of the internet! :)

I know nothing about Autism whatsoever but it seems to me that you are getting the kind of care and environments he needs.

Hugs to you all!

i don't know what to say erika. i'm sure this diagnosis wasn't what you were hoping to hear. it is sad, and i'm sure it's a lot to digest and take in. but i know that you and dave have done all you can, to get him the best help in the areas that he needed it. and you have been so lucky to have amazing help, and people that truely care about drew and support him.

I think I would cry too, but it sounds like you have the most wonderful people and support around for your family and Drew. I don't know a lot about Autism and to be honest my son has a lot of those same issues. Not sure if you know but Ali Edwards son, Simon has Autism. I'm sure her blog would be a good resource for you and I've always found she has time to answer any questions.