And time marches on. I love this time of year but can't seem to get a grip. We need 2% milk, but with each trip to any kind of store I can't seem to remember to get any, even when it's clearly written in huge letters on my list. So I'm beyond the place where list-making seems to help. I'm just insane. I can't get it together.

At any rate, I tried to get some photos of the kids today while the last few leaves are clinging to the ends of the branches. Won't be long and they'll be all gone. 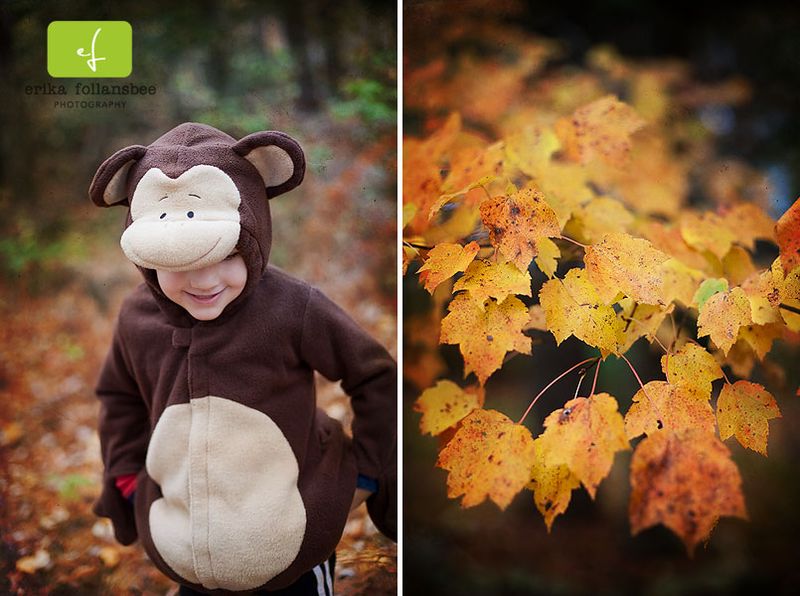 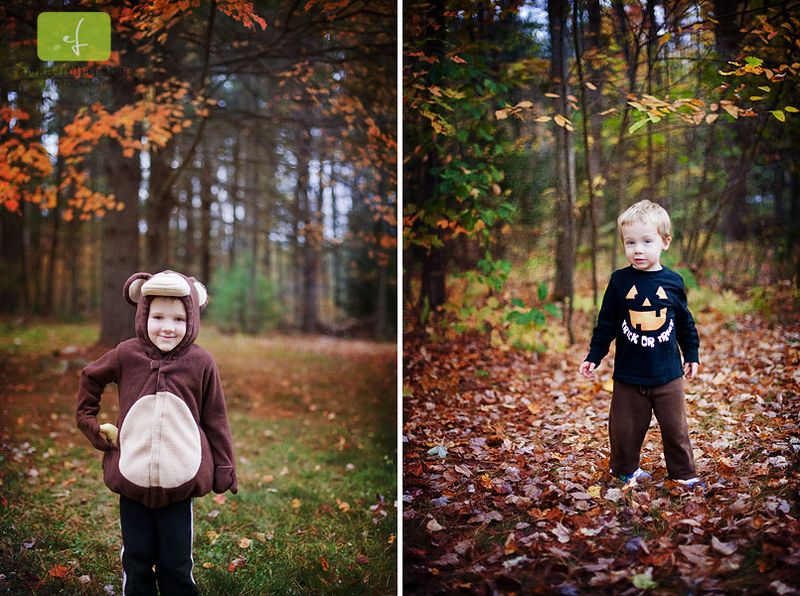 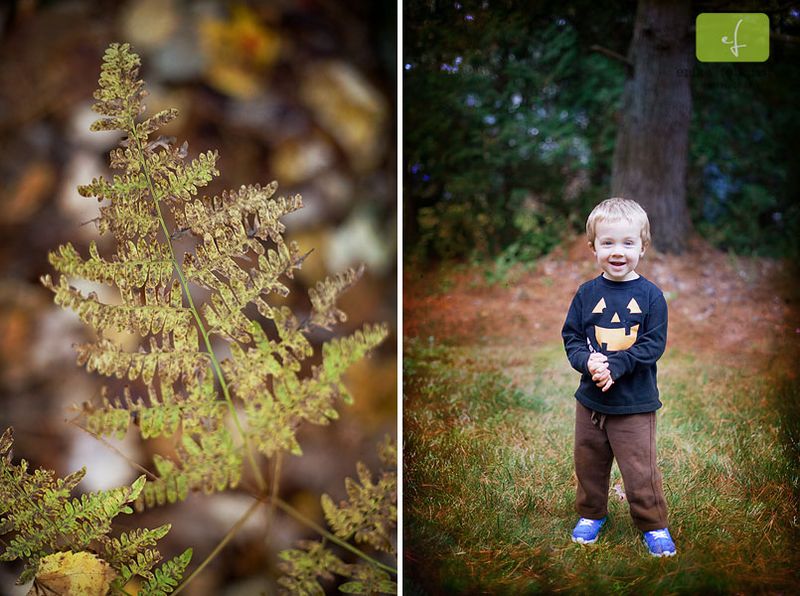 Drew is excited for Halloween, and seems to mostly remember going trick or treating at the mall last year. And keeps asking when we can go do that.  He loves to wear his monkey costume, although he's certain he's going as a ghost this year (he's not.)  Parker also has a matching monkey costume but is resistant to wearing it, so who knows if he will wear it for trick or treating on Halloween night. I'll have to bust out his hamburger costume again from last year (which still kinda fits) and see if he'll wear that if necessary.

A Romp in the Leaves

I've been bemoaning the fact that October is half over and I have barely had time to notice the fall..... and now the leaves are falling off the trees just as hard as they possibly can and the colors are so vivid now. Today while waiting for the bus I decided to take my own advice (that the time is NOW for photos!) and get some shots of the kids playing in the leaves.

Look at the big guy Drew!! He can so take direction now! Loves having his picture made, and mugging for the camera. I was thrilled. He was also all excited about his sweater, his shoes (new black Chucks), and the leaves, and everything. :) Happy kid. 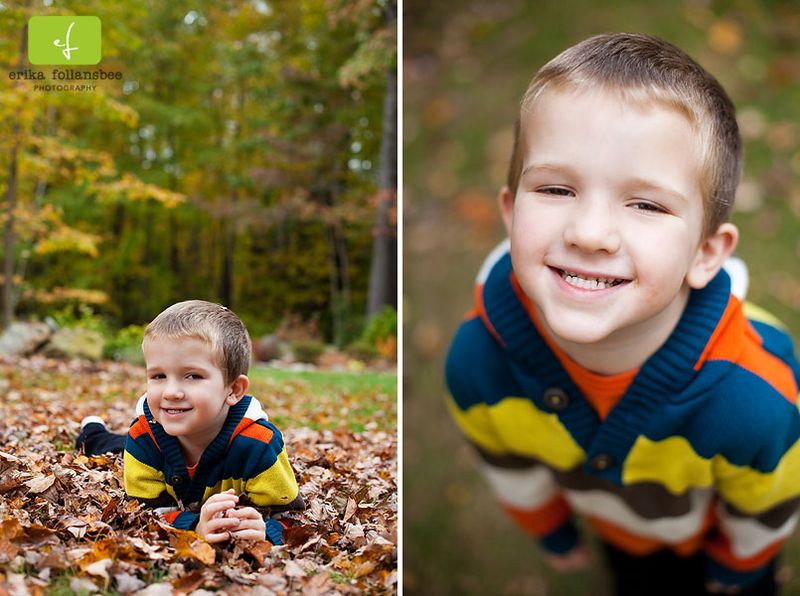 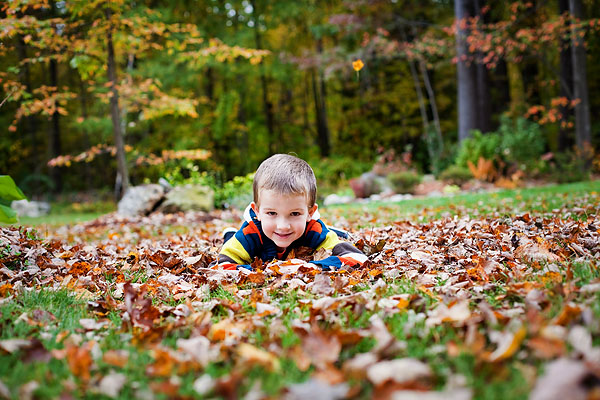 I'm so happy that I took the 30 seconds to go back in the house and get my camera. I have these beautiful photos as a result that I wouldn't have if I'd been lazy, or decided to do it "later." Time marches on, and doesn't wait for "later" or "next time."

I was so psyched during my trip home to North Carolina in early October because it coincided with the Dixie Classic Fair dates! It was the fair that I grew up going to because we lived in Kernersville during those years, so I have a lot of early memories of fairs there. And these days I have always had a secret wish to take off one evening and head to the fair by myself just so I can take pictures. With kids in tow, it doesn't leave much time or opportunity for creativity, so it's been many years since I got to satisfy my love of fair pictures (and I'm still not there!). 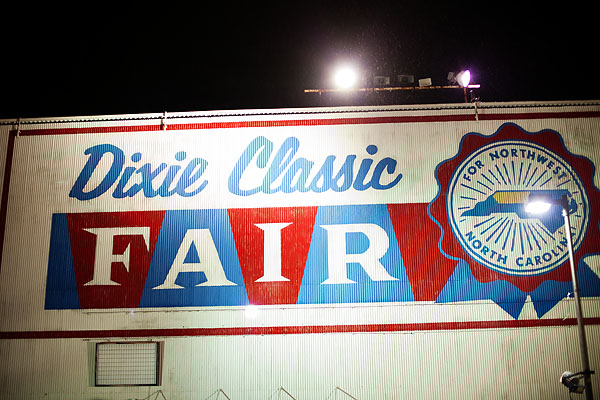 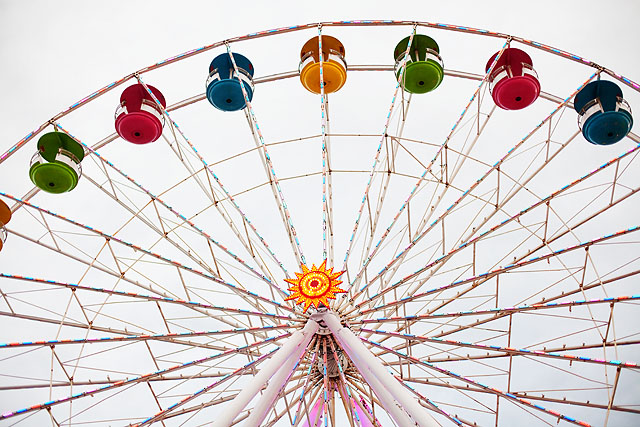 Unfortunately it was not to be the case this time either, even though I was going with all adults. Too bad it drizzled rain most of the time! That was a real bummer although we still had a great time and I managed to salvage a few shots all the while sheilding my camera from the rain inside a plastic Target bag that I found in my mom's car en route. 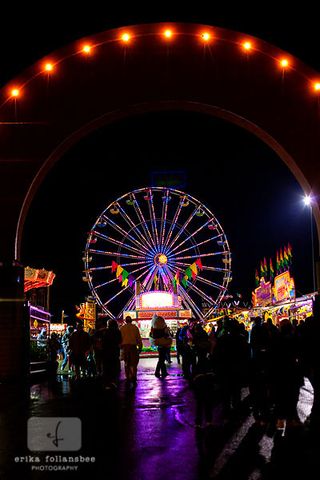 Fair food! What in the world would I choose as my fair indulgence this year, in the South? I hardly knew what kinds of things they had there anymore, it's been so long. I've about had it with pizza and sausage & peppers because you can get that ANYWHERE. Ugh. What would be the perfect regional fare at the fair? There were certainly a zillion BBQ stands everywhere and that would have been great, but I could get that elsewhere. And I definitely was not going to be one of these..... certainly not something you can get anywhere else but I wasn't into it. :) Two great tastes that taste weird together. 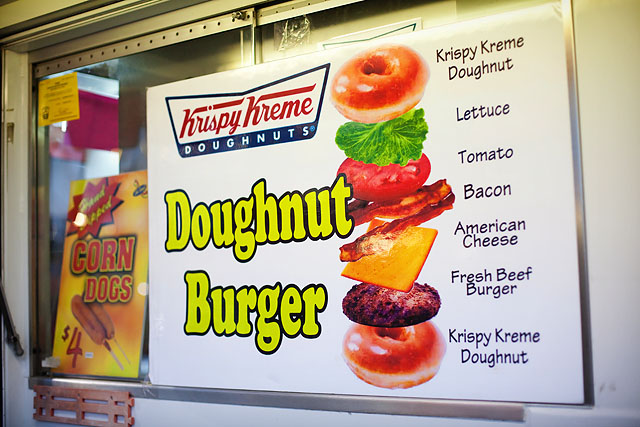 My mom had the perfect idea--Moravian chicken pie, complete with a thick slice of pound cake.  It was more than perfect!  It was served up in the brick buildings near the main entrance where all the churches and civic organizations house their food offerings. Too bad I never got a pic of the chicken pie (but it was soooo good and fresh), but I had the pound cake tucked safely in my pocket just waiting for a shelter from the rain. :) That baby wasn't going anywhere. 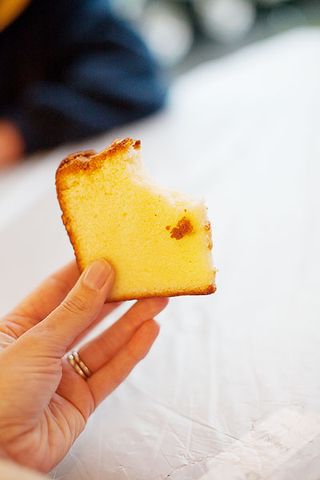 Here's Jill and Derek enjoying their bloomin' onion. It was a good one! And who's the so-called photographer who left the lemonade straw in the middle of the frame? Ooops. 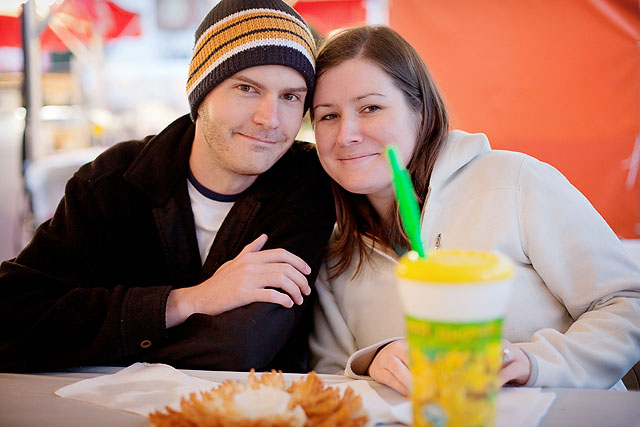 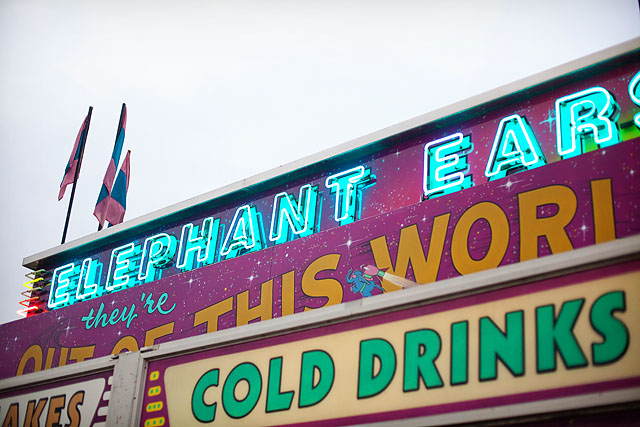 And lastly, the funnel cake that nearly did us all in. (so nice to be able to call it "funnel cake" or "elephant ear"... the only names that make sense to me! In New England it's just "fried dough".) 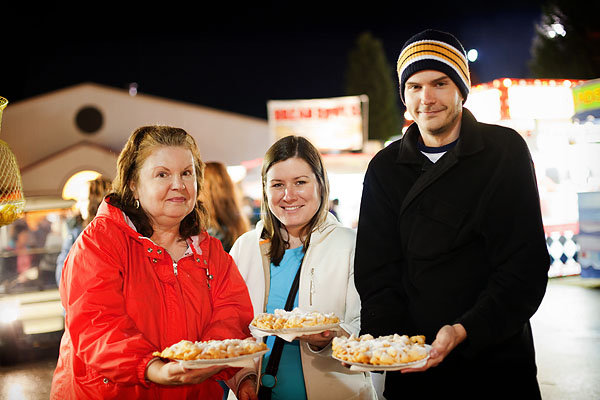 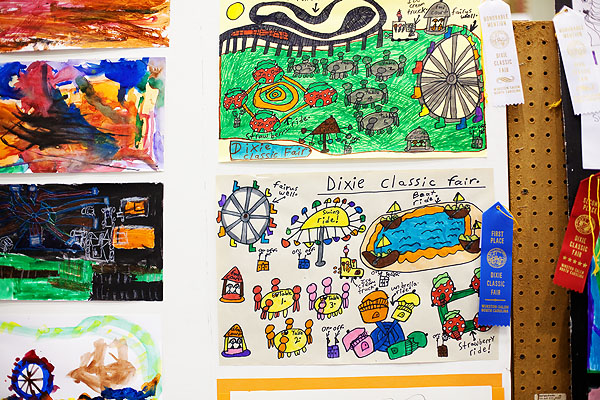 I was very interested in all the food competitions...... rows and rows of cookies, poundcakes, biscuits, and breads all lined up with tags and ribbons. I want that job! 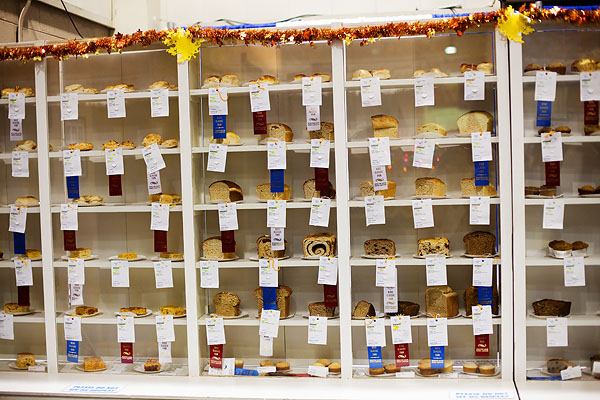 One of the last things we saw was the vegetable barns and agricultural products....including bees! This honey display was very beautiful with the light behind it. 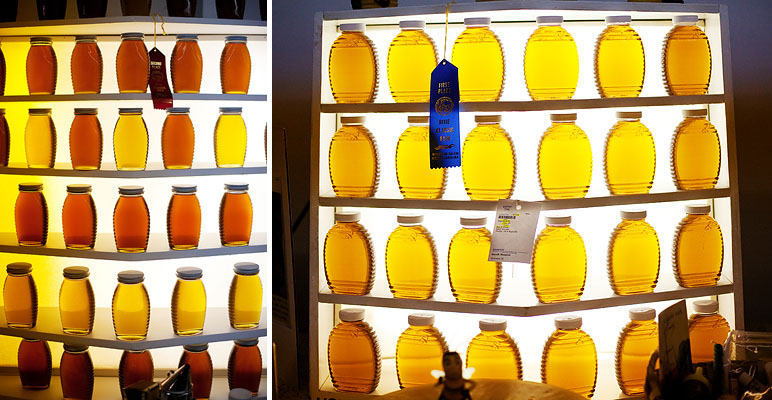