So a while back, Dave and I did a Segway tour. I'm just now getting the photos, which is why I didn't blog it earlier. :) I had taken my fancy camera with intentions of taking it with us, but as it turned out, there was no way I could have hauled that thing around my neck while trying to concentrate on driving the "personal transporter." Ha! It looks easy, and it is, eventually, but it sure was hard (for me) in the beginning. I was super slow!

Here we are getting oriented inside the store before heading out to the parking lot to continue orientation. No, don't adjust your video, it's not in slow motion. :) That's really me creeping along like an old lady. VERY skittish at first.

It took me a while to get up to speed (such as my speed was) but I did catch on, and did okay with it. In fact, I completed the whole tour which was miles and miles on that thing. Seriously, it was SO FAR. We just kept going and going, all the way down Elm St, down to the Hilton and the Fishercats Stadium, way down the Riverwalk/ Rail Trail, and finally over the Hands Across the Merrimack Bridge, waaaaaaay down to the end at Kelley St. And THEN, turn around and all way back to Hanover St. Phew!  It was very scenic and very neat. It was actually the first time I'd ever been down any of that area, but for Dave it wasn't new since he goes running down that very trail often. I thought it was cool.

It's a strange feeling to travel that far and not move a muscle. It got uncomfortable after a while. I kind of felt like it would have  been easier to walk that distance, because you're not just standing there not doing anything. But it was fun, a novelty. People see that stuff around here so often that they don't take much notice but it was a fun geek experience and something that you don't get to do every day. :) Good times! 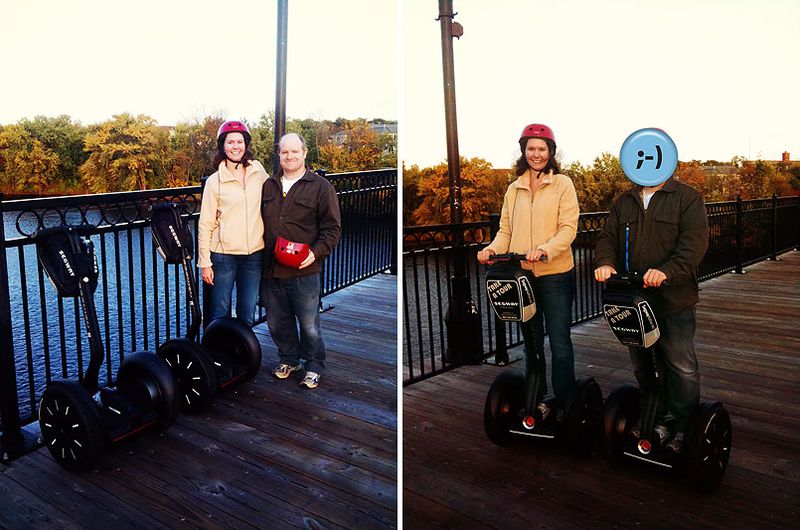 Dave didn't like the way he looked in his helmet, so I'm not allowed to show that picture. :)

Brooke, yes there was quite a lengthy waiver that needed to be filled out and signed beforehand! :D

Wow! This kind of tour would be an awesome gift for my hubby. Looks like fun, but as you said I can imagine it would be strange feeling after a while. Do you have to sign your life away before you are allowed on the street with them?