Today I have a photo shoot, a real one with a family that I have never met. It's a baptism in a Catholic church, and then some family photos at home. It's a woman that Dave knows from work, and she lives 2 hours away.  It should be a great opportunity! I will be using my flash with my new Lightsphere for the first time; I have big hopes.   I learned quite a few things from the baptism I shot for family back in January, so I hope to build on that knowledge and produce something the parents will cherish.  Wish me luck!

In other news, I finished my knitted hat! It doesn't really look like the picture and it's a tad too big and a tad too short (can't roll up the bottom edge) but I like it!  And it was easy, so what the hey. So with that one under my belt... onto bigger and better things now!  Will post a picture soon.

knittin' up a storm 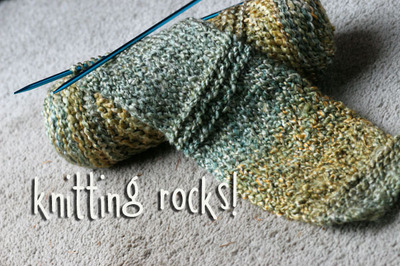 So here's my first efforts in the world of knitting...  what do you think?  It's just a scarf. You can tell from the very end where I started how worn and twisted and shredded it is, ha! Then it gets better towards the back. It's been fun and I've learned so much. Now I know my knit from my purl, which I consider to be an accomplishment since I didn't know they even existed about 2 weeks ago.  So, it's coming along. Next project is a matching hat, or toboggan as we call it down South. (I have since learned that up here a toboggan is a "sled." Whatever...)

Plans for the weekend? Nothing! Except maybe a trip to my favorite restaurant On the Border since we haven't been in a while. Next weekend brings big plans, my friends: the Deerfield Fair! Which is the equivalent here of the state fair, or the county fair. Good country fair at its finest.  One of my favorite photo ops of the whole year.

I hate this time of year.... it's 7:03 and there's only the slightest hint of light in the sky through the tree branches. I love it and hate it all at once. Hate the end of summer, love fall, but hate what it's bringing. Autumn is like all dressed up in a fabulous costume to deliver the worst news ever: winter. I never hated fall as much as I do now since living in New England, the herald of winter. It's better and worse all at once. A bitter pill.

I do admire people's enthusiasm for fall here. People are nuts over it. People who never mowed their yards all summer long suddenly appear with mums and scarecrows in their yards, pumpkins on their porches. Their enthusiasm is contagious. I love the effort. Of course these same people who put plastic pumpkin bags of leaves in their yards will still have them laying around under the snow next March, but the effort now is admirable. Even their crabgrass towering over their curbs and sidewalks look kind of interesting now, when they turn craggy and purplish red. ::rolling eyes::  I have never seen a place where the lack of yard maintenance is acceptable, but apparently it is the norm. HELLO, MOW YOUR FREAKING GRASS.

Anyway, it's just a Pet Shop Boys kind of night so I'm off to putz around, as they say. TGIF!