Things have been remarkably easier in the past month than they were in the beginning. Mostly because Parker has developed his morning nap and it's amazing. It's a 4-5 hour nap which happens on 75% of days. Unreal! I don't expect this to last forever but I sure am enjoying it while it's here. Also his nighttime sleeping is still good, and once we get him to sleep, usually around 9pm he only wakes up to eat once in the night (occasionally twice) before morning. Unbelievable!!! I never knew (breastfed) babies could be like this?  With Drew I was up feeding him literally every two hours around the clock until he was seven months old. I mean, seriously. Compared to that, this is surreal to me.

And Parker continues to be completely different from Drew in pretty much every way possible. Parker is so indifferent about eating, it's so funny. He rarely acts like he's hungry, never throws the huge meltdowns that Drew did. Parker will pretty much always eat when it's offered to him, but it can be hard to know when he's ready for it. So undemanding!  He's obviously getting enough because he's got great little fat rolls, and he's zoomed into 6M clothing. He's not my little 50th percentile baby anymore!  Looks like he'll be a big 'un like his brother (except with a more proportional head--LOL). 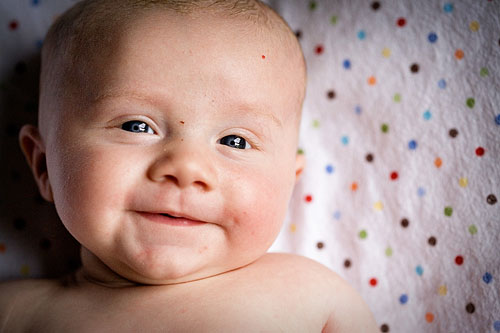 He's such a little talker already!!  Dave and I both have had long conversations with him, cooing back and forth and taking turns making sounds. He's full of huge smiles and gets all offended if people don't constantly talk to him. He's okay to stay by himself for short periods but he'd much rather have somebody there talking to him.  We're not sure what to do with this little extrovert..... when all the rest of us are card-carrying introverts.

Warning: This is so cute it'll make your teeth hurt.

He's started whacking his dangling toys this month, and likes to smile and talk to them. Also he likes to lay on the floor and put his arms straight up, fists clenched. He looks like he's riding a roller coaster and going "wheeeeeee!"

I can't believe it, but it's time for him to start holding up his head!! When we carry him around upright he can hold it up vertically no problem, and has pretty good control. Lying down on his belly he's still working at it, but it won't be long.  He's lifted his head several times now in his daily tummy time, but certainly can't keep it up for long and isn't comfortable on his belly. That will all start changing quickly though.

He's gotten mobile enough that he kicks around a lot in his bed, so I've had to vastly cut back on the blankets in his crib. I enjoy the early weeks when they don't move but those times don't last long. :) So now he has to be safely zippered into his "sleeping bag" so he doesn't kick it off and can't pull it up over his face.

In addition to already being in 6M clothing (and being really close to outgrowing it), he's now in size 2-3 diapers also. Slow down, kid! 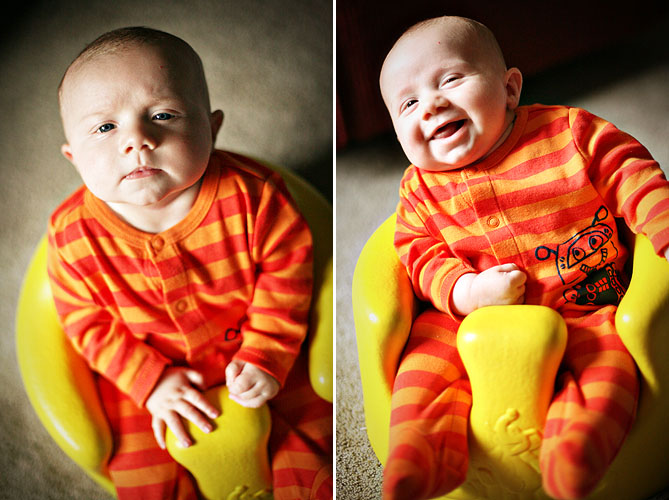 As for me at 3 months postpartum, I'm doing great. I've lost almost 10 pounds in the past month alone so I'm feeling good about that. The shorts that I couldn't even zip up at the beginning of July are now baggy. I just have 10 more pounds to go before I'm back to my pre-pregnancy weight and I think it's pretty do-able.  I even took all my maternity clothes to Goodwill earlier this month. GOOD RIDDANCE!!!

However even though I feel great, I think my hormones are still trying to get back to normal.  My hair is falling out by the handfuls, I mean massive amounts are falling out every day. It's insane. But expected..... this happened after I had Drew also, and I ended up with two bald spots on each of my temples by the time it was all over with. LOL. Also my face is breaking out which hasn't happened in years.  Oh well. At least my purple splotchy legs are back to a live person's color, and the big gnarly lumpy veins have shrunk back down for the most part although I expect they'll always be there in some form. 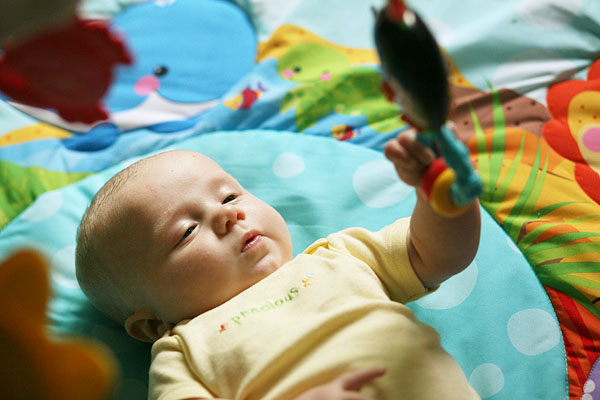 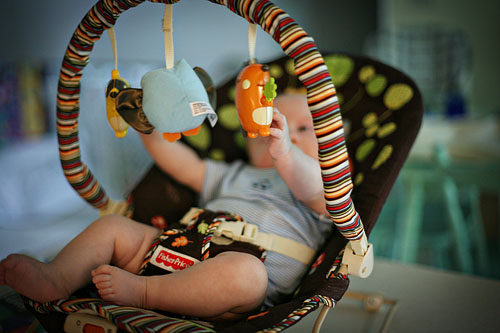 This was taken a while back and finally made it to the internet for sharing! :)

In honor of St Patrick's Day I thought I'd post my favorite video about leprechauns. Oh my Gawd.

This cracks me up. I have never seen this movie, except for this one scene and it kills me. Normally I can't stand this kind of comedy, too slapsticky or something, but it is Steve Martin, after all...... he makes anything funny.

No matter how many times we hear this, it always gives me the supercreeps. Ugh. (turn on your sound)

This was taken today, but he's been toddling around for a 2-3 days now. It's weird. I'm loving this new phase!  Every day that goes by, he walks more and crawls less to get where he's going. I think he's done with crawling now that he knows how fast and efficiently he can get places.

I love how he walks around with his fists up by his ears for balance. It's so funny how wobbly he is, and then he'll start listing to the side and can't get it back. Or sometimes he'll lose his forward momentum and he's just walking in place trying so hard to get going forward again.

pardon the messy house and dirty baby wearing dirty clothes.... LOL.  He lost his 2nd nap this week all of a sudden so that means I also lost all that precious time to catch up on my housework.  I'm not quite sure what to do with my walking, 1 nap toddler boy....

Actually it was yesterday... 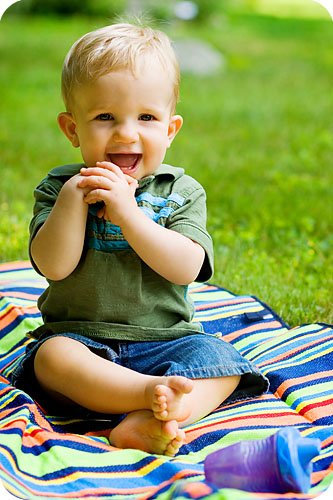 Here we are walking clear across the screened porch.... he has to hold my hands for balance but hey, it counts!